In places Freeman Creek is just as steep as many of the other groves famed for their vertical slopes. Fortunately, it has a few more level spots in between occasionally.

I wandered up to that grove last weekend. My goals were to find the big one on the Freeman Creek Trail mentioned by Flint in his book and Loren’s Tree. I figured the most straightforward way to do it was to follow the watercourses that each grew upon, down and up, respectively, until I found them. The plan worked. It was a bit tiring but successful in the end.

I first attempted to take on the Freeman Creek Trail Tree, and it turned out to be the easier of the two. The top of the Freeman Creek Trail starts out right at the creek very near where I was camping (in Quaking Aspen Campground) and it runs roughly parallel to the north and west of the creek all the way down to its end five miles later. I figured I would just walk down the creek until I found the really big tree that Flint says is about halfway down it. Yes, it would be off trail, but against that it was downhill all the way. Shouldn’t be too bad, and on the way I would see some nice creekside vistas and a lot of sequoias. In fact, it worked out pretty much that way.

I should mention that one of the nicest dozen acres of sequoias that you can see out there with minimal hiking, and near civilization is about a half mile down the Freeman Creek Trail. If you go to the right off trail at about that point, you will hit the Bannister Tree, and in the bottom of the meadow there is a stand of really peaceful and beautiful big sequoias that rival any similar-sized grouping out there. It’s got the Bannister, a big leaner, a hollow chimney/telescope tree, some fallen carcassas, and half a dozen standing giants all within a twenty-minute walk of the car, and it’s not really on the tourist roadmap so not busy enough to run into a lot of people.

Going down the creek I ran into a lot of deadfalls; no burns lately down there, I guess. However, the downhill makes it less strenuous. I think it actually was about halfway down the trail that I ran into the big one, like Flint showed on his map. It was 22,180 cubic feet and pretty impressive to see. I started early that day, at like 8:00 a.m., and a couple of hours after noon I found it.

After having a bit of lunch, I found my way back to the trail by heading generally north, then slogged uphill to return to the trailhead. I must say, I saw a lot more sequoias in the creek bed on the way down than I did along the trail coming back. However, off-trail work is always tiring. I was happy to get back to a nice trail, and I returned to camp midafternoon.

The Loren’s Tree trek was the most strenuous walk of the weekend but equally rewarding. It was about eight hours of off-trail hiking. I started at the Goshawk Tree and went up the right-hand side of the watercourse there. I had already tried a small circle and come up dry, so this time I intended to go about halfway up to the Needles and then circle to the left across the ridge and come back down the left-hand side of the waterway, making a bigger circle on the hill. Basically I’d go up the right-hand side, cross over, and come down the left. There was still no guarantee that I would find the Loren’s tree in the couple-mile circle, but I figured this would be the best way to cover new ground.

I first ran into a somewhat burned and broken sequoia that was big enough that it could have been the big tree in a bygone age, before it burned and was reduced to nearly a snag. Then I found another big-looking tree on a steep hillside. I measured it and found it to be about 15-foot dbh, not big enough to be the one I was looking for. (After I got home and did the calculations, it came to 16,972 cubic feet.)

After the crossover, I’d started on the downward left side of my circle when I ran across the Loren’s Tree. When I saw it I knew I had found the right tree. Of the sequoias that are listed as “other large trees” in Flint’s book, it is one of the largest. Its dba was 20 feet. My calculations later came out to 31,860 cubic feet, which puts it in the mid-30s on the Top List—darn high for an also-ran. And it’s in pretty good shape except for the typical uphill burn on the base.

Although tiring, it was definitely a successful trip—I accomplished both of my goals. I don’t recommend this trek to anyone who isn’t a strong hiker and comfortable finding their way off trail; however, if you’re up for it, seeing both of these impressive trees is well worth the effort.
Large tree along Freemam Creek, large tree above Loren's tree and large broken tree near Loren's. 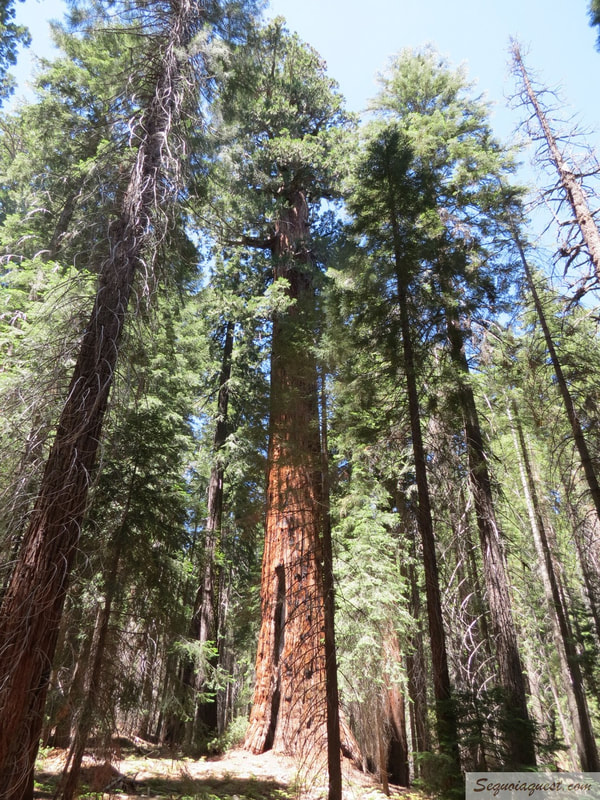 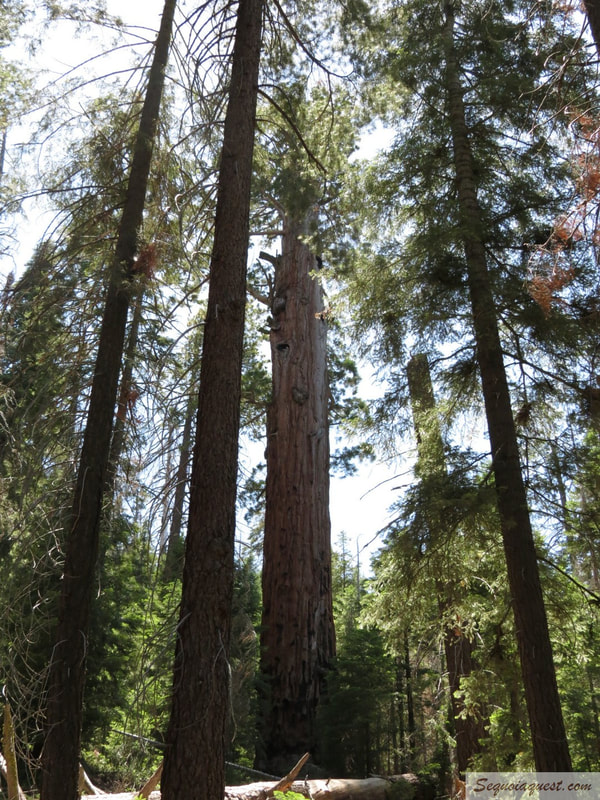 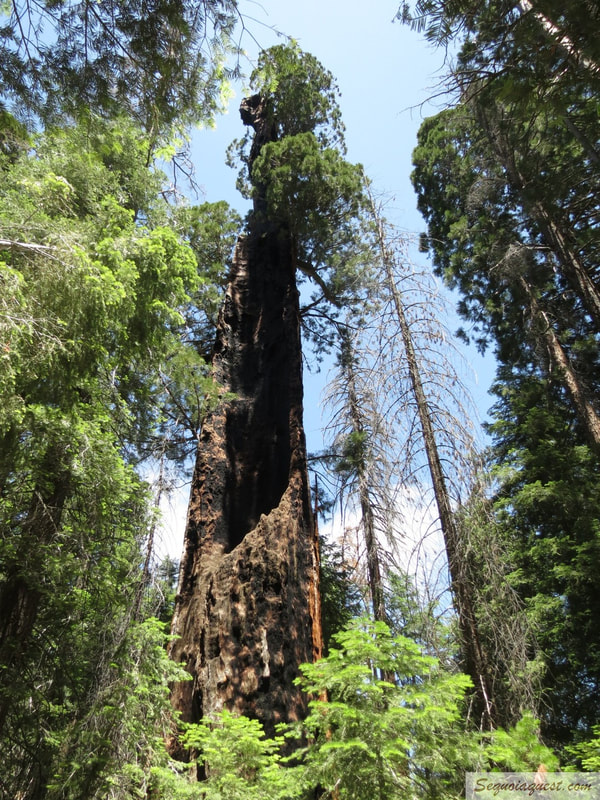