I had the opportunity to do a quick visit to the Starvation & Packsaddle Groves last week and assess the damage done to them firsthand by the Windy fire of 2021.  The decimation looks pretty complete in the starvation grove as i had heard. (90% mortality is actually what i had heard and that looks to be pretty near correct)  See pictures above and below of Starvation Grove.

Looking down over Starvation from the upper road thru the grove we could see the black sticks of the majority of the mature sequoia.  Very few of them have survived and indeed one of the largest of them was still smouldering from an internal fire burning over a year after the acreage of the grove was consumed in the Windy mega-fire.  The soul of the former tree escaping to heaven in the smoke. 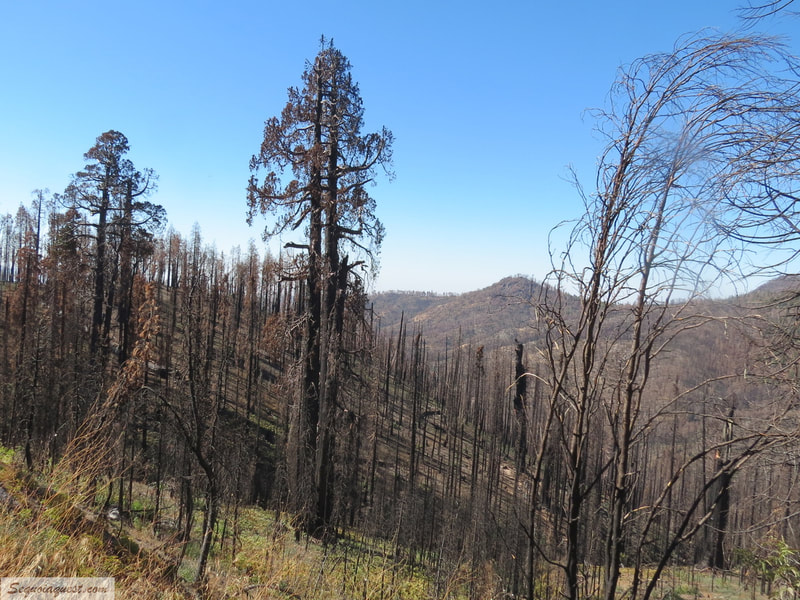 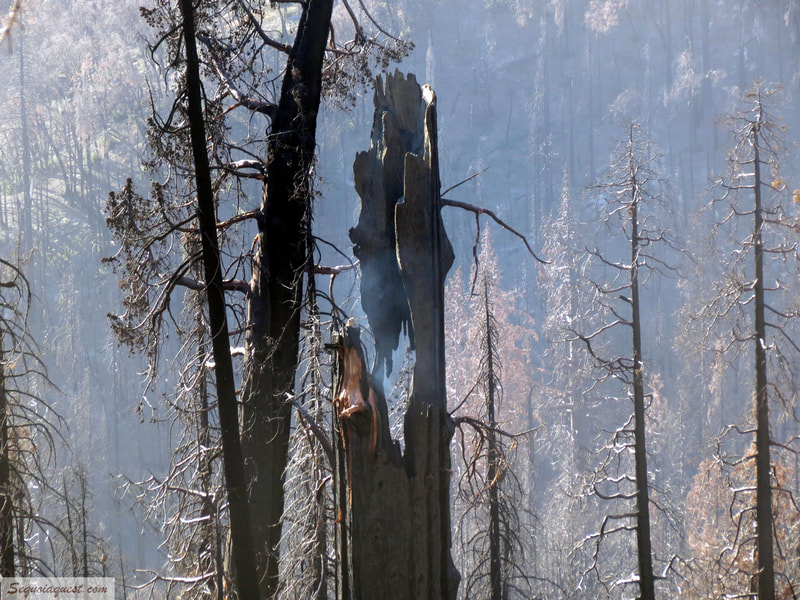 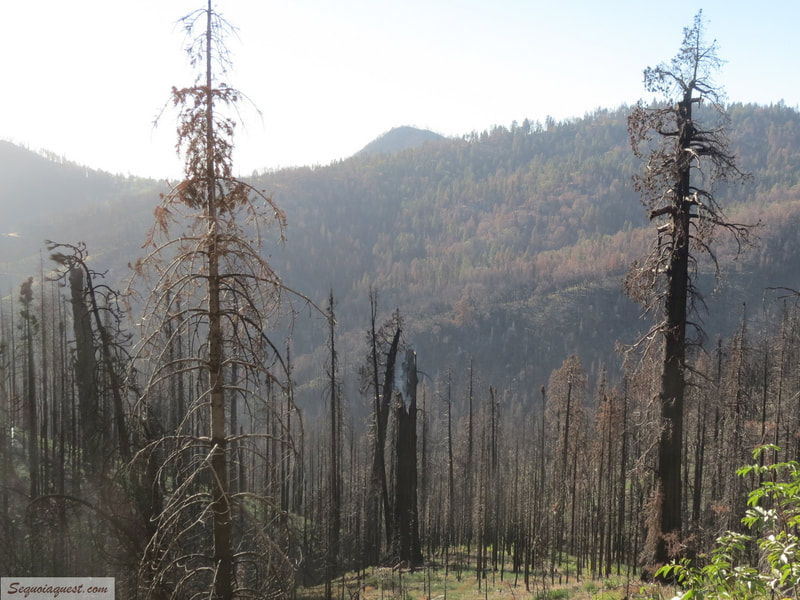 Packsaddle Grove was less devastated than Starvation, however it was not spared by any means.  I would say pretty near to 50 percent of the mature sequoias did not survive based on what i saw in the Packsaddle Grove areas i hiked.  I spent one day hiking down the stream bed in which the Packsaddle Giant and Ghost grow to where that tributary meets the Packsaddle Creek and then back up the Packsaddle stream bed.  Along the way there were several of the largest former inhabitants fallen, completely destroyed, or severely damaged.  I wish i had made that hike before the Windy Fire so i could have taken their measure. 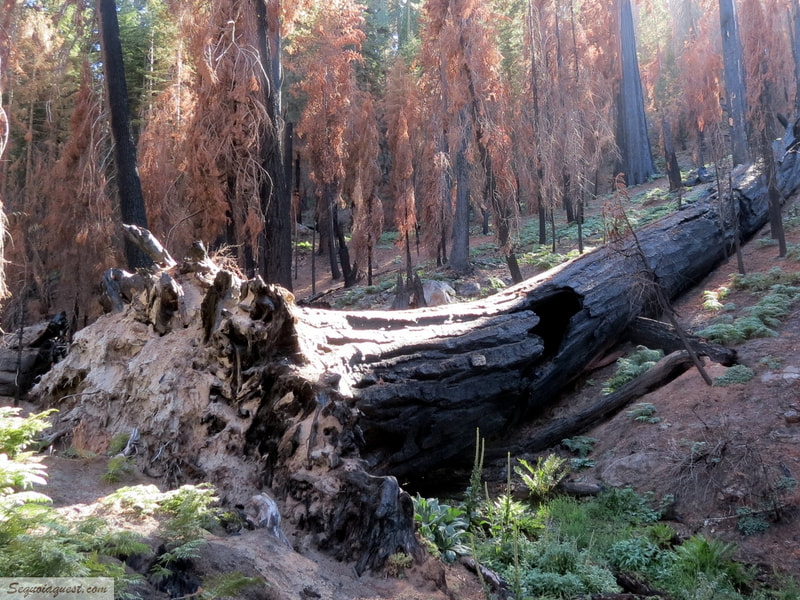 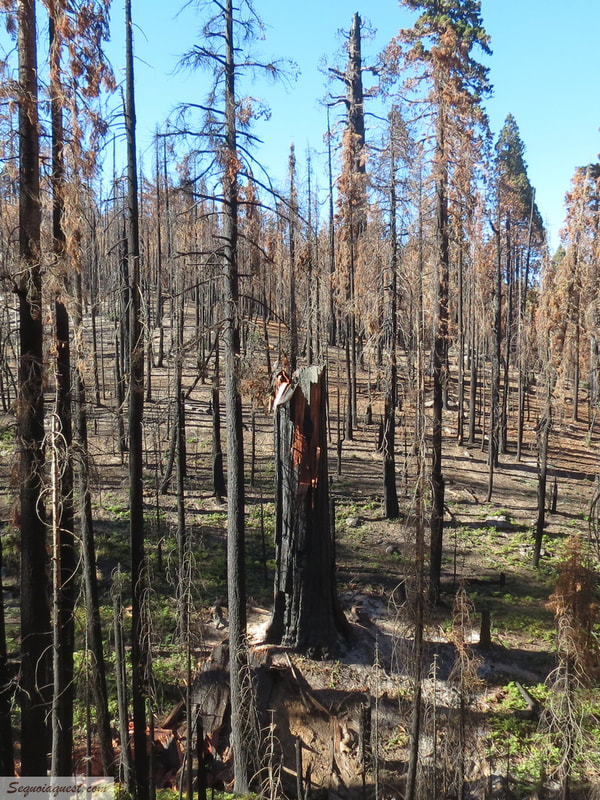 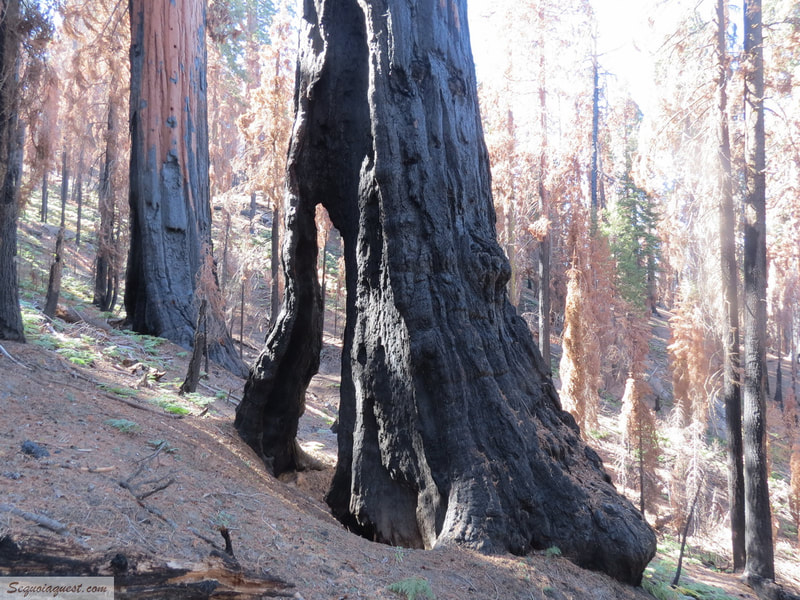 The largest tree in the grove, the Packsaddle Giant appears to be a total loss.  It still stands over 200 feet tall, however as a skeleton only, with a completely blackened base all the way around its lower trunk.  The foliage remaining on it is all severely heat damaged by crown scorch, and no significant areas of new greenery have come forth this year that i could see.  It has the dubious distinction of being the largest tree killed by the Windy Fire.  See below for a small sampling of pictures of the Giant as it looks now. 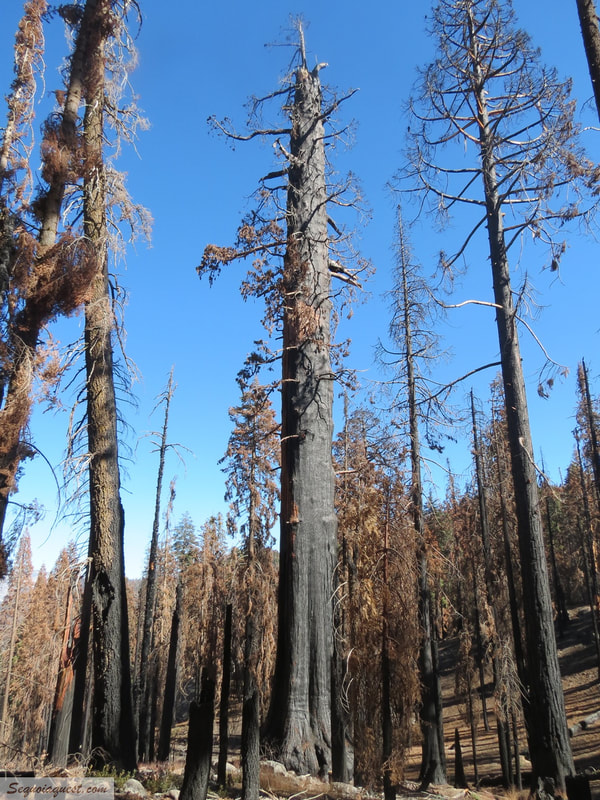 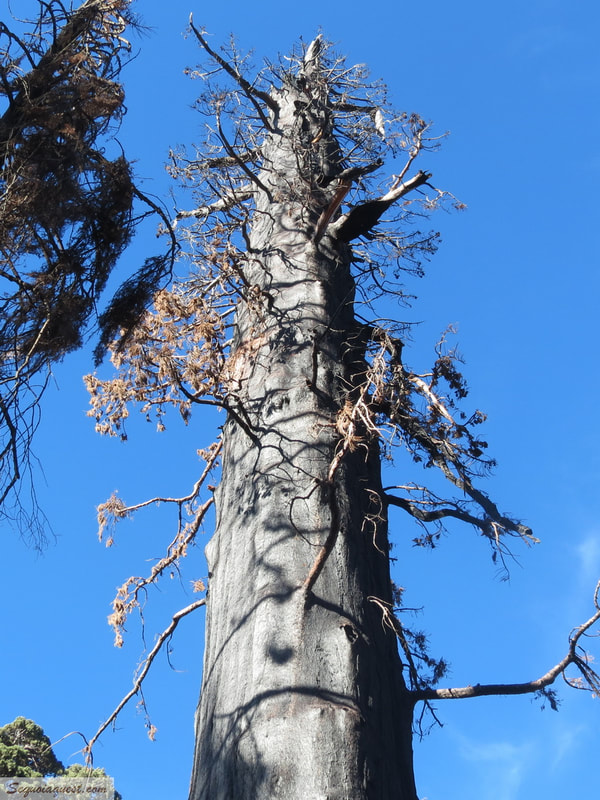 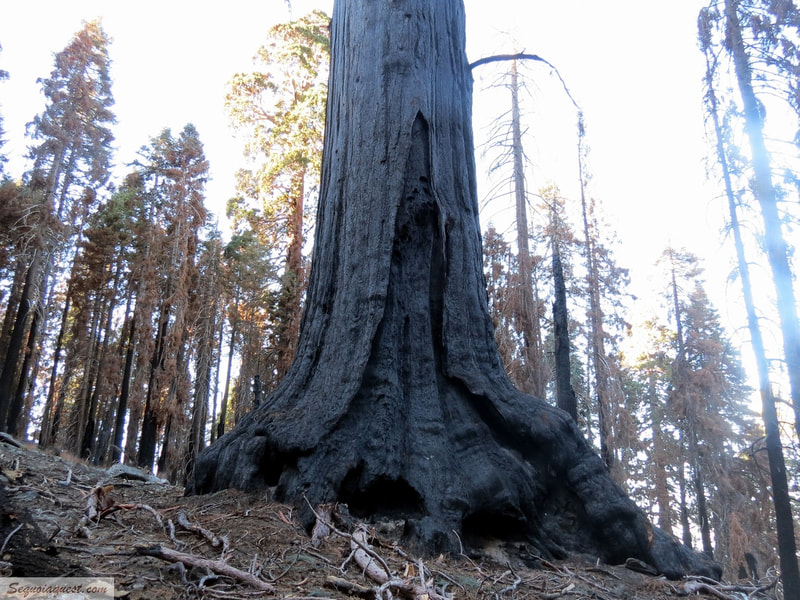 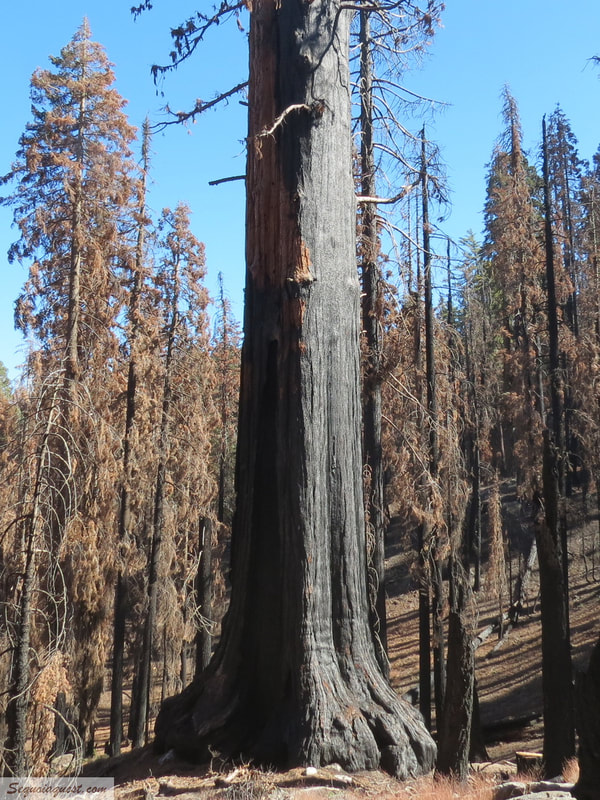 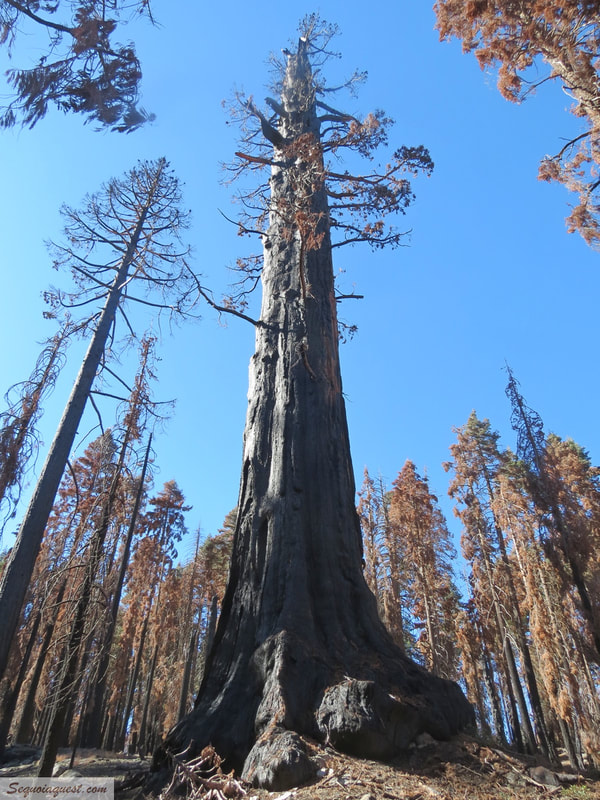 The Ghost Tree is in better condition, tho not a lot. Before the fire it used to have its main bole broken off at approx 150 feet, however with a great deal of  good new leader foliage growing above that; and thickly enough that its abbreviated top was nearly obscured.  Now, post Windy Fire, it is topped at nearer 125 feet and its remaining upper bole is burned hollow to well below 100 feet on its height, probably as low as about 75 feet.

The western side of the trees' stem has significant green foliage and looks to still be in good health, the eastern half has very little.  Its tallest new leader branch prior to the fire, also located on its eastern side, has suffered sufficient scorching from the heat of the fire that it shows no new greenery left on it now.  Prognosis on the Ghost tree is most probably that it will live, however it will take a long time to regain to its former lush foliage, if ever, and none of it likely coming from its former highest soaring leader branch.  Below are some current pics of the Ghost tree. 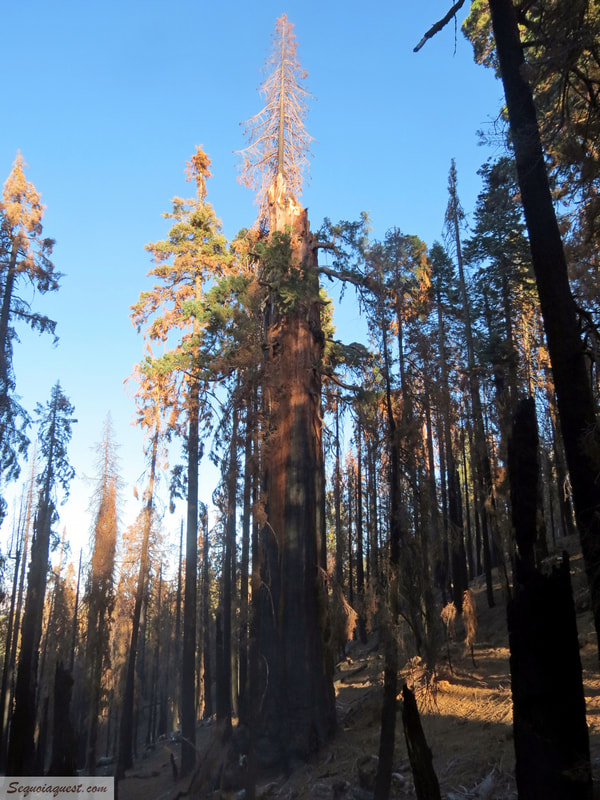 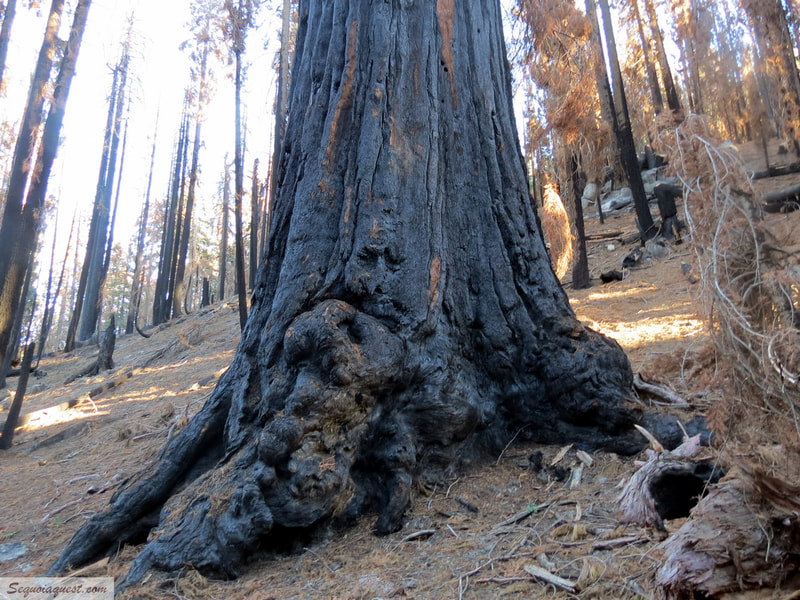 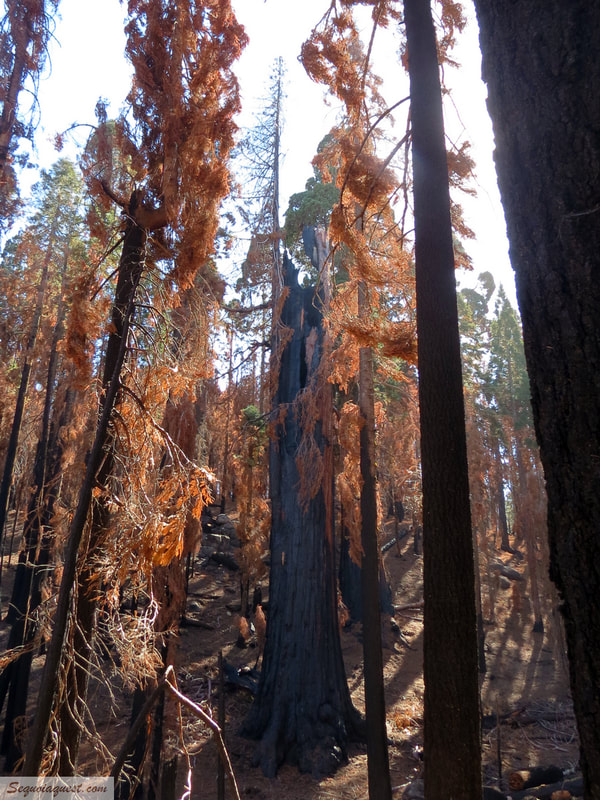 Below are a couple pics of the large tree just below the Giant which is now broken off at just over 100 feet, also a complete loss.  The second shot shows the Packsaddle Giant in the background. 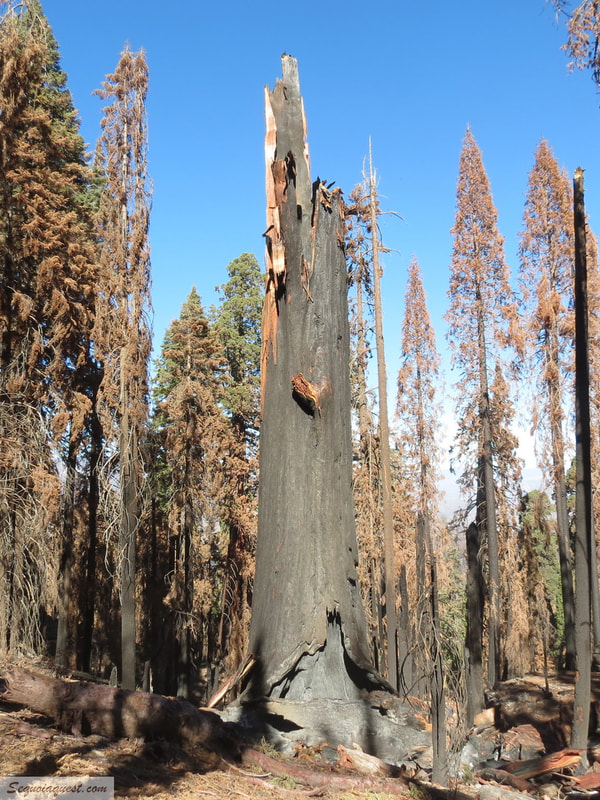 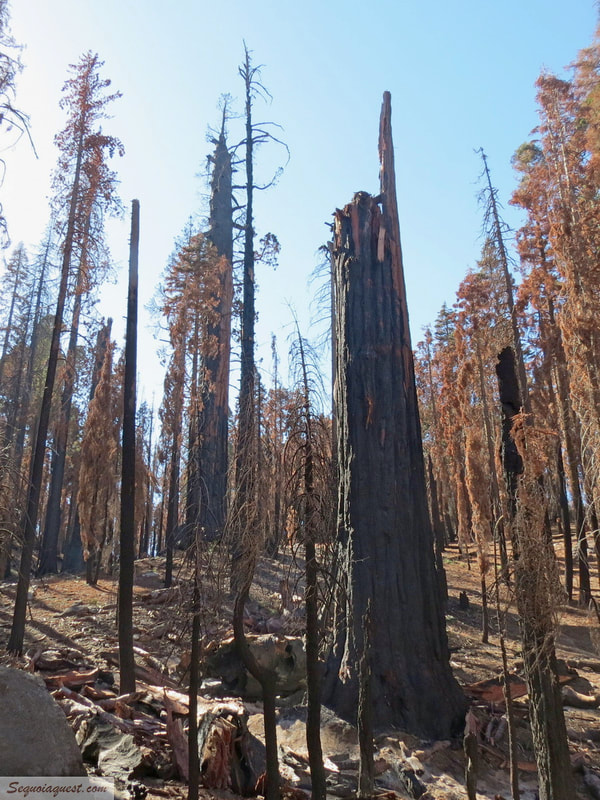