In 2017 the Railroad Fire burned areas to the south and west of Nelder Grove and unfortunately touched part of the grove itself. This was a pretty big fire and in places quite intense. Since it caught some of the Nelder Grove, I wanted to check on the affected areas and determine the trees' condition.

Even now, after more than a year, evidence of the fire is everywhere. All the tree boles that remain vertical are blackened, and I can't tell yet for sure how many will survive. Unhappily, I identified some definite casualties.

The Shadow of the Giants Trail is one of them. It used to be a very clear, self-guided trail with informative plaques every tenth of a mile or so describing each sequoia, its living conditions and characteristics, and many other plants with which it shares its environment. It was a pleasant, easy walk among the trees, with very little altitude gain and more than a dozen mature sequoias along it. Unfortunately, the trail is being overgrown and has signs now saying it's closed. All the plaques were burned in the fire. The bridges along the trail over Nelder Creek have disappeared, so the trail at some places is now un-navigable without climbing down and back up through the small ravine and its undergrowth at each creek crossing.

The largest tree in the area used to be on the ridge above the west side of the trail, no more than a couple tenths of a mile, but just outside the Nelder Grove boundary on twenty acres of land owned by Caltech. It was named Millikan, after a professor from the California Institute of Technology, but was decimated by the Railroad Fire of 2017. It is now a stunted, 125-foot-tall hollow shell of a snag split into two halves leaning on each other and will most likely be no more than a mound of debris soon. The four smaller mature sequoias on Caltech land, also named after prominent people in their circle, may still be alive--only time will tell. They are in much better shape than the Millikan snag; however, they all received tremendous heat stroke and look pretty blackened at the moment.

The Upside-Down Tree is just down the hill from the Millikan Snag, between it and the trail. It used to have a complex knot on top, 150 feet up, with many small, convoluted, short limbs coming out of it, looking more like a root spread than a tree's leader, however the fire burned the system of root-like knotted, twining branches. It has a separate leader branching from the cap that reaches another 50 feet up and has some foliage. It may survive; I can't yet tell.

The whole area is a very sad sight right now. I am sure nature will find a way to eventually restore at least some of its former luster, and I hope the majority of the big trees survive their frying. 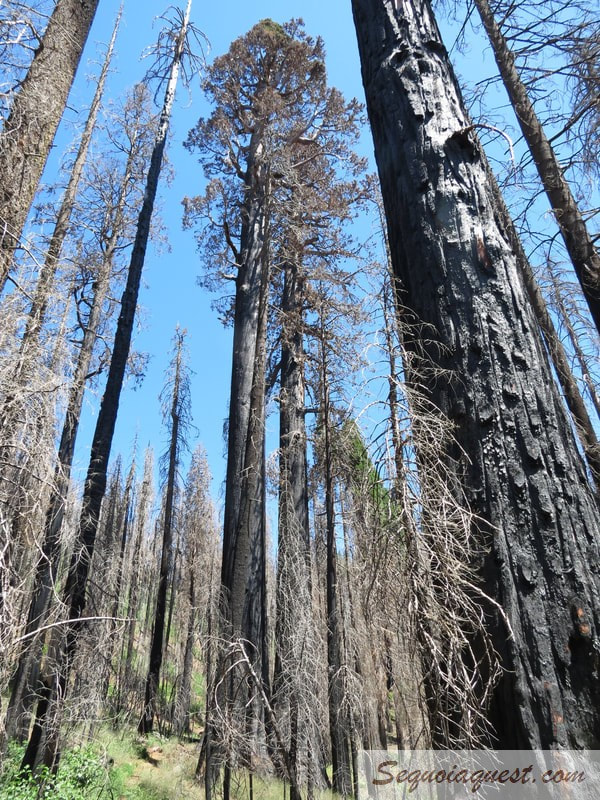 Other trees on Caltech's area of the grove.
Suffering from intense heat stroke; however, with only small visible bole damage.
The Millikan Tree remains. Formerly a 22-foot-dbh tree.
A shame; it would likely have qualified for a place on the largest trees list.
Sequoia Quest