Armed with Brenda Negley's fine guide book Nelder Grove of Giant Sequoias: A Granddaughter's Stories, I went up to Nelder Grove this last weekend, intending to measure the largest of the trees there that did not already have their volumes listed anywhere. I had noticed several impressive specimens there in prior trips, and the book shows diameters on all of the trees, so I had an easy time planning my visit. I simply went through the grove taking down particulars for every tree with a 60-foot circumference at breast height or larger.

Since this trip was all about the numbers, let's get to the results about the trees I measured:

By the accounts of those who should know from the past, the 22-foot Millikan Tree would have scored high on this list. Also, we lost some nearly 20-foot trees in the Railroad Fire that would have filled out the lower portions of the list.

For comparison, the volume numbers on the two previously measured large trees in the grove, Nelder and Bull Buck, are:

The Ladder Tree is impressive--the largest one I measured in the grove. Its base is 82.5 feet in circumference, and it holds its diameter well up to its broken top, which is still almost 10 feet wide at approximately 188 feet high. Its highest extremity makes it to an altitude of only 219 feet; otherwise, it would be even larger.

The Double Flying Buttress is included in the list in spite of its vast internal vacancies. The traditional way to measure volume in a sequoia includes the spaces from any of the tree's internal burn cavities; however, this tree has some big vacant sections inside of its two 50-foot-high flying buttresses. Nevertheless, burned open internal sections are not taken as a demerit. Even taking measurements from the damaged side, the tree still shows enough of a silhouette to nearly equal the Bull Buck in total volume and is over 80 feet in periphery on nearly level ground. It's a unique tree to see.

The Hawksworth is the next largest grove specimen and a beautiful complete tree, fortunately showing no significant damage from the recent fire.  Given its location, it is a lucky tree with very little burn showing on its huge base. I got an almost 80-foot base circumference.

Below the Ladder tree, two shots of the Double Flying Buttress tree and the Hawksworth. 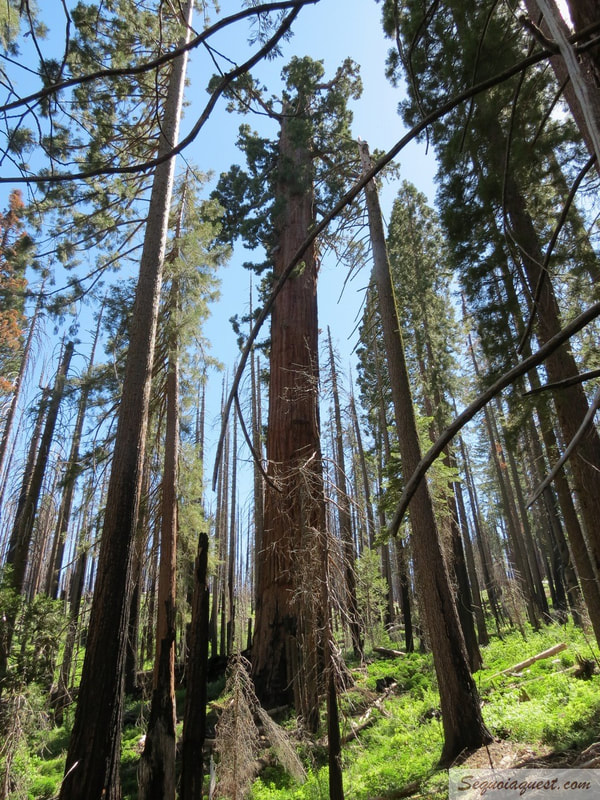 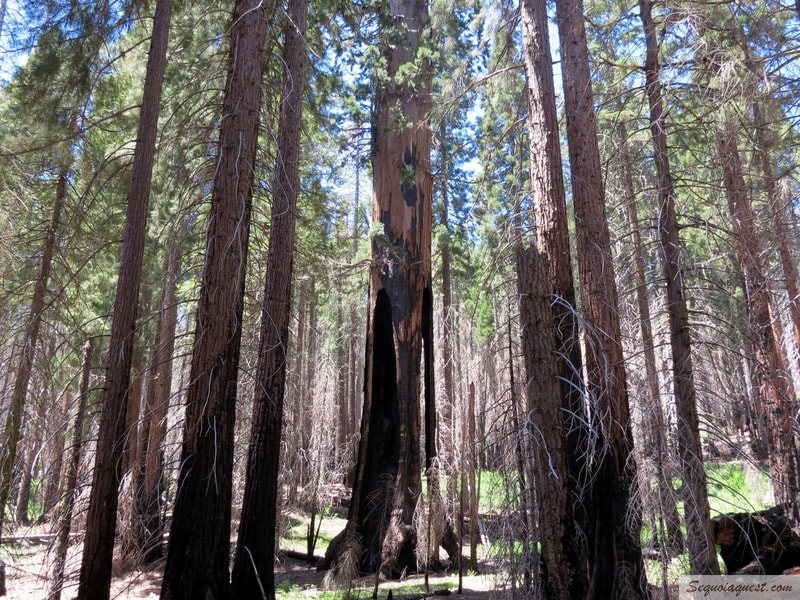 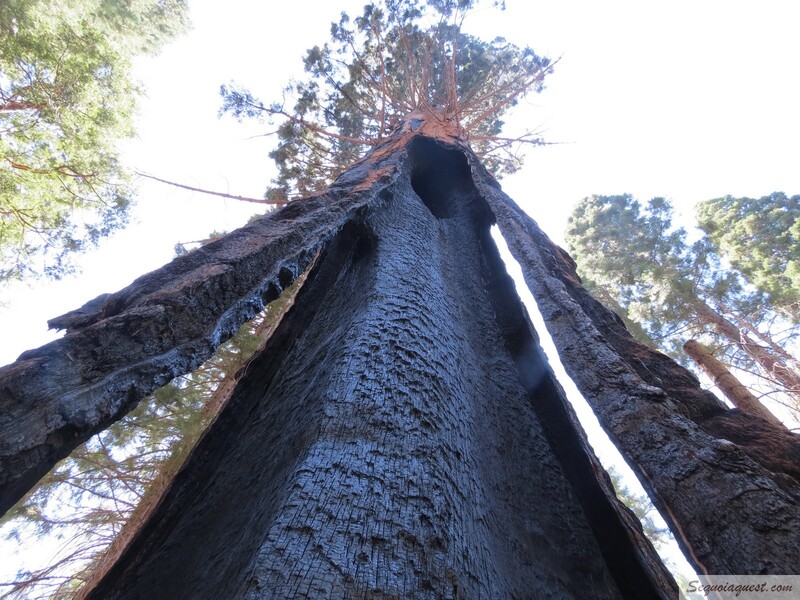 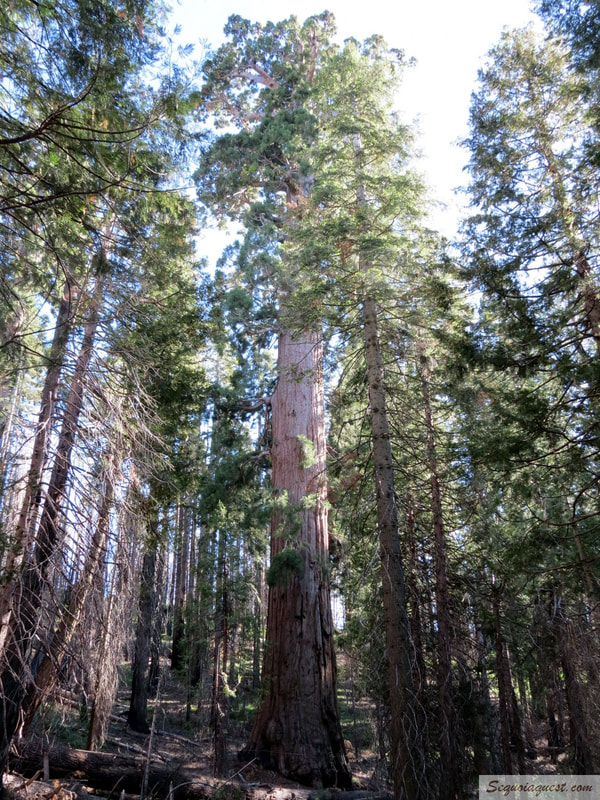 Other trees of some size up in Nelder including the Double Burl in the first pic and Washout in the middle. 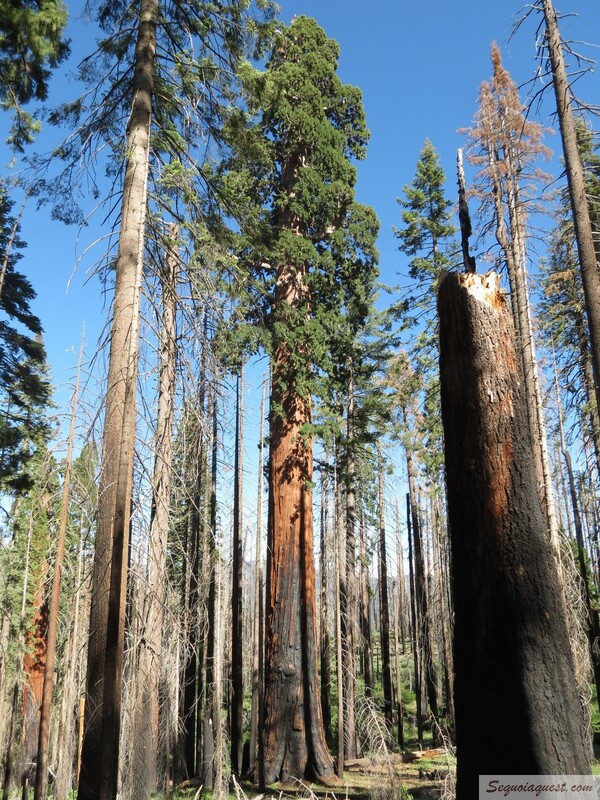 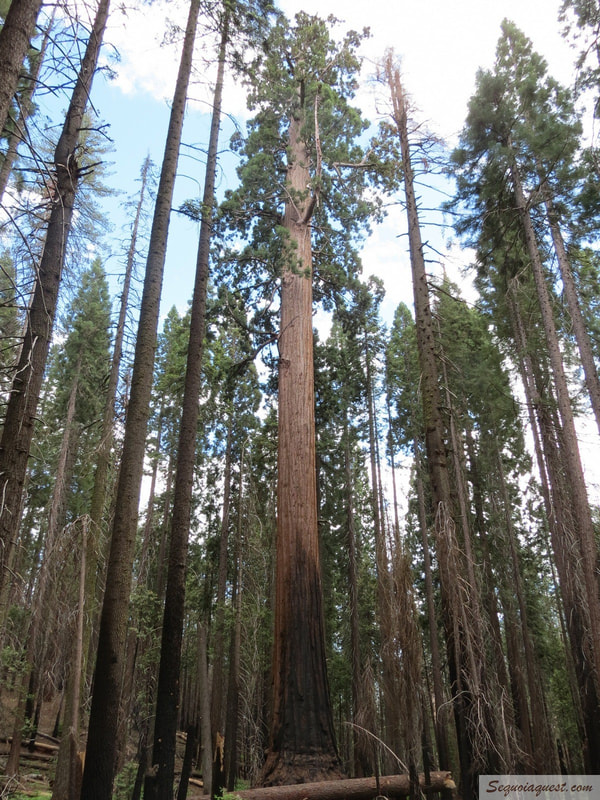 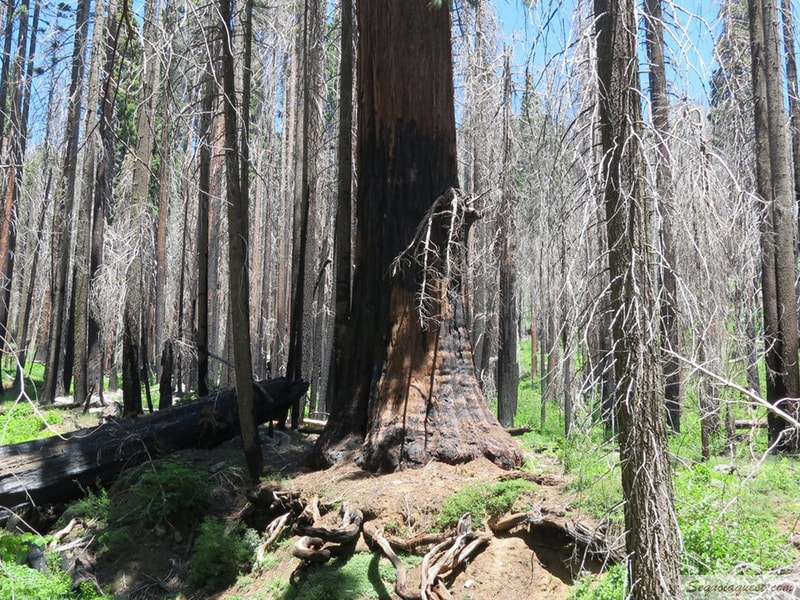 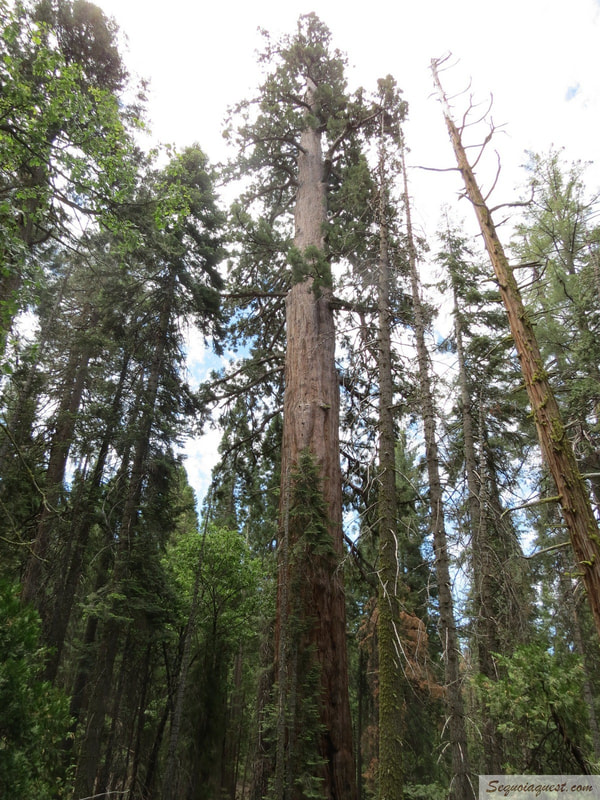 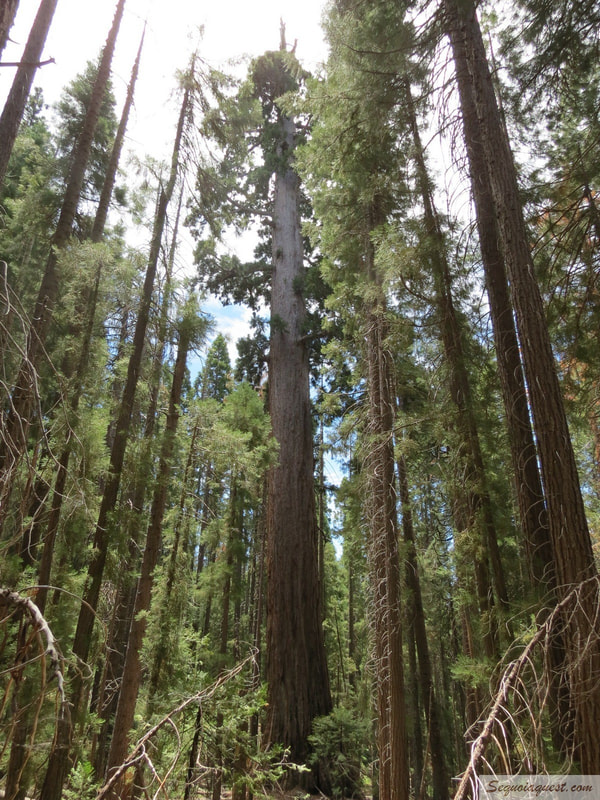 Some other well known trees;  Smokestack, Old Grandad, and a couple of the Forest King. 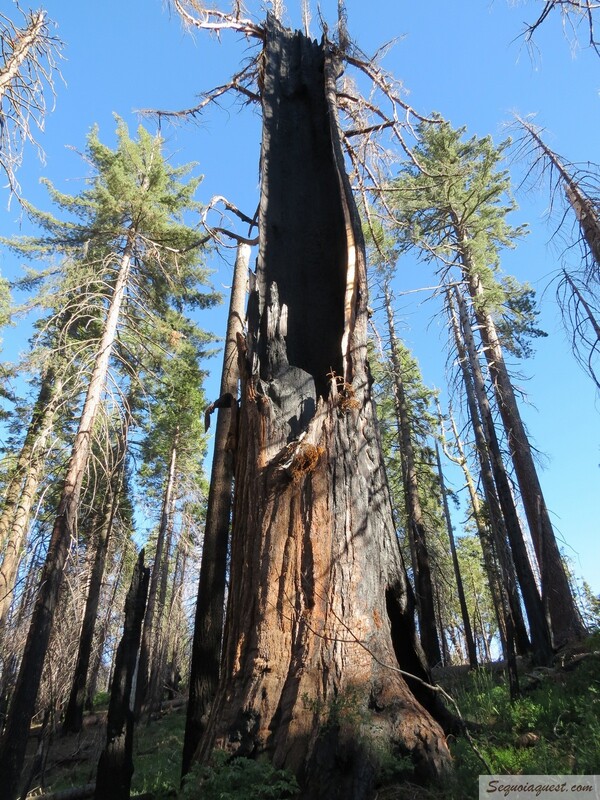 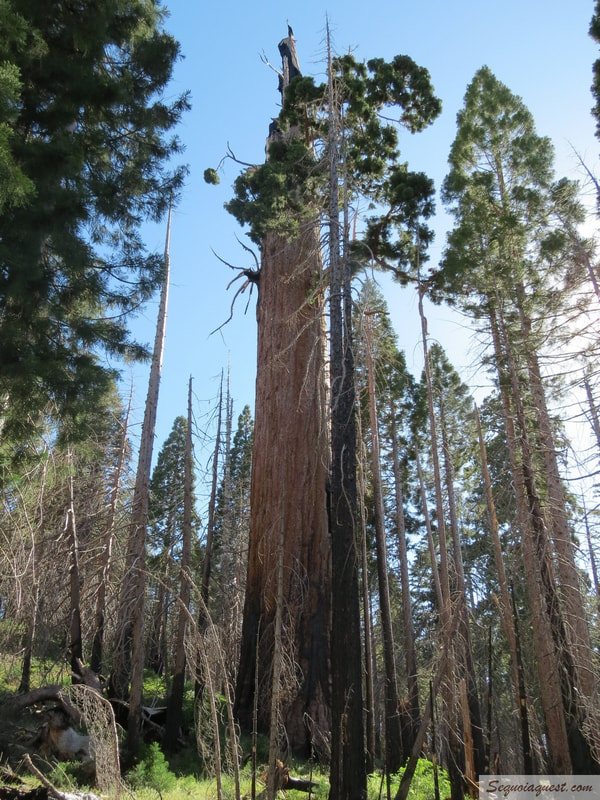 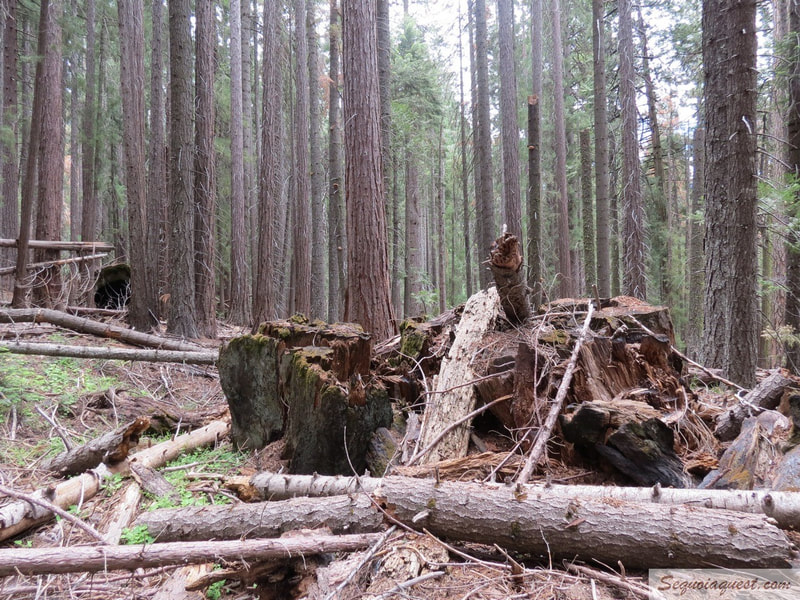 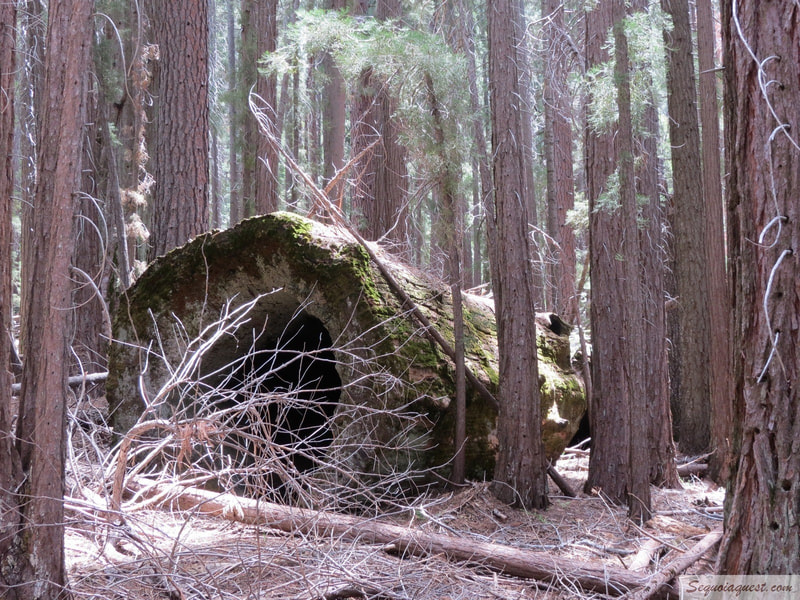 On a sad note, most groves have endured some damage over the years, especially from the recent fires, and Nelder was no different, as evidenced by the trail name "Graveyard of the Giants." This grove was quite heavily logged years ago, so in addition to the natural sequoia snags and fallen giants, there were more stumps than upright healthy giants. So the grove has always felt sparse on its outskirts to me. However, in its core, there were still many large sequoias.

The recent Railroad Fire, however, took a large number of the healthy trees, including everything in the Nelder watershed below the Leaner Tree and many on the outskirts, like the ridge. All of the several dozen trees below the Graveyard Trail that were in the Shadow of the Giants Trail are now bare of bark. White skeletal remains are now standing with most of their branches, as an even larger graveyard exhibit than the original trail by that name. It's depressing to see huge sections of the grove devastated. If you walk through anywhere other than the Nelder Basin, you realize that the deceased sequoias far outnumber the still-standing living giants.

The Graveyard Trail past the Clothespin is now overgrown with brush and nearly impassible, as is a lot of the burned area above and below the trail. You have to push through the bushes to navigate it, and it's getting hard to see where the original trail went in some places. The Shadow of the Giants area is going to brush also.

The only silver lining is that many small sequoia seedlings are coming up in the open spaces. The young are thriving presently, and hopefully that will continue. Given time and sufficient water, we might get these sections of the grove back; however,  it's going to take a lot of time. 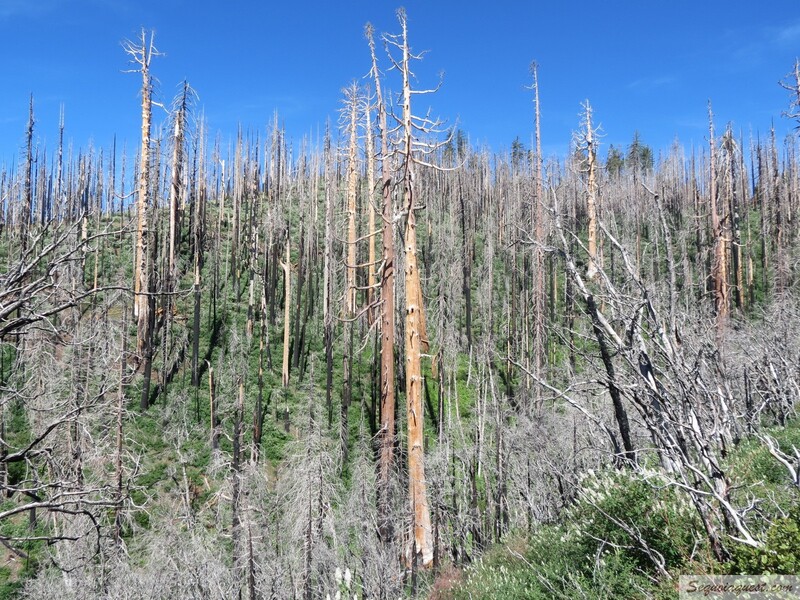 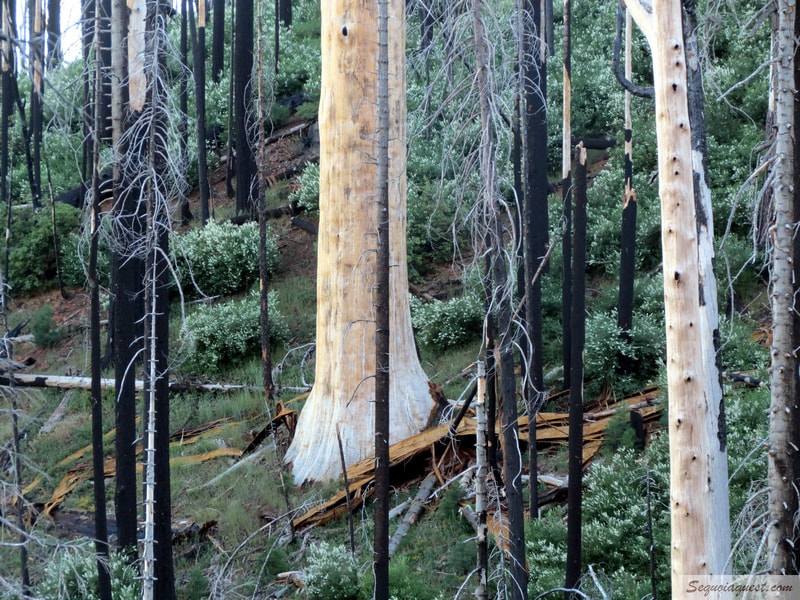 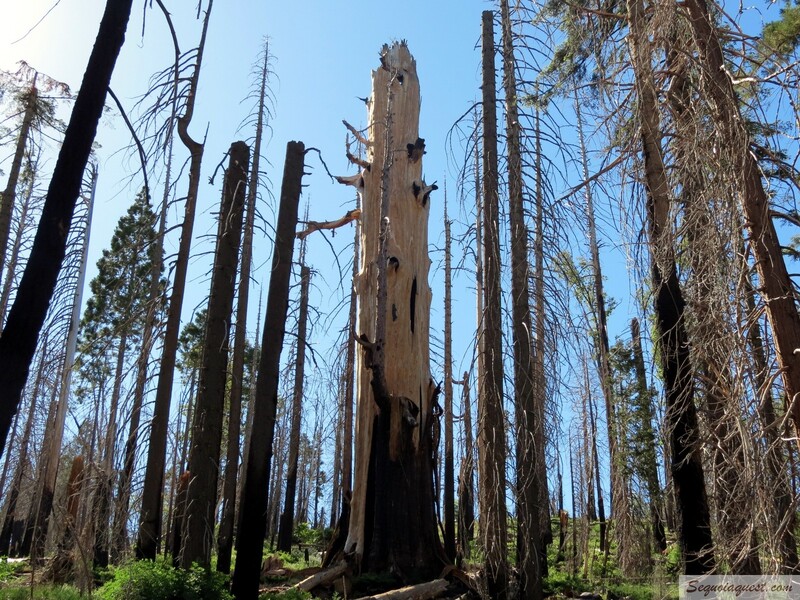 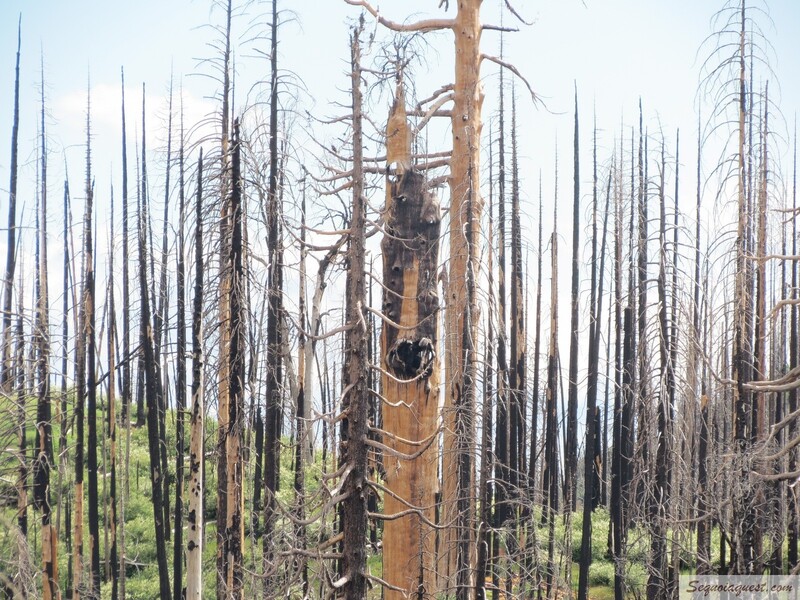 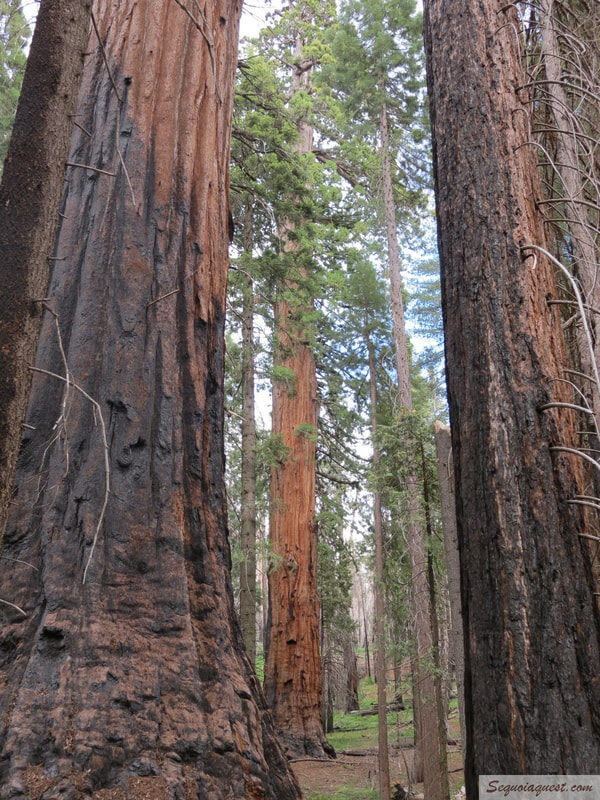