We went up to the mountains last weekend to assess the damage to the area from the recent Castle Fire. It was incredibly depressing, with shades of gray prevailing throughout. We'd seen heart-breaking pictures of damaged and destroyed cabins on the news and the internet, so we took this trip with the expectation of finding devastating losses. Our hearts go out to the owners of these cabins.

We walked a short length of the Freeman Creek Trail from the Quaking Aspen side, took the Nelson Trail up to Gutless Goliath, walked to the Alonzo Stagg Tree, and made a little quickie run down to the old fallen King David Tree by the Quaking Aspen Christian camp. The burn was very severe in some of those places. A lot of hillsides along the trails had 100% burn, and not even the fire-resistant sequoias will probably survive. McIntyre was the worst I saw, with gray everywhere, deep ash covering everything, and very little of the sequoias' characteristic cinnamon bark color even showing anywhere.

Here is a partial list of familiar named sequoias we saw and a quick description of the trees' condition. Warning: it's ugly.


Alder Creek:
We did not hike to the Patriarch, Above Patriarch, and Matriarch trees up the Bear Creek Trail; however, I have seen some pictures of them on the internet and they all look like the rest of the McIntye Grove area, fully burned. There is a good likelihood all of them have sustained terminal damage. Some trees in the Matriarch's nursery look like their chances for the future are promising.

We wanted to get into Mountain Home to assess the damages there, but the roads were closed, as was the road to the eastern edge of Freeman Creek Grove, so we could not get into either of those areas. I hope the recent logging in Mountain Home might have helped the sequoias' survival rate due to fuel reduction. The eastern Freeman Creek Grove, conversely, had a high concentration of downed trees and hence more fuel for longer, hotter burns than most of the places I have hiked recently. I hate to think of all the trees in those two areas that might be damaged or gone. However, I need to check them out. I'm not looking forward to it.

In our wanderings last weekend, we found at least a dozen still smoking chimneys--broken-off trees with glowing coals inside and smoke billowing into the air, one with visible flames. And the King David carcass was still glowing internally, obviously still burning like an old campfire where the late snowfall could not get to it.

We lost an unusually great number of our largest and most unique "plant friends," as John Muir would put it. The expected sequoia survival rate in a typical forest fire is high. Instead the 2020 Castle Fire resulted in a surprisingly high casualty rate in many areas. We will need to study the reasons for this more catastrophic than usual resultant for the big trees to determine how to prevent another tremendous loss in the future.

If you wish to venture up there to see these sad sights for yourself, keep in mind that the ash is slippery and sometimes deep, and there's a danger of falling limbs or tree crowns. Check the weather before you go, and if high winds are predicted, reschedule your trip.
PICTURES
Of the groves we visited, McIntyre seemed the hardest hit, with some smoke and residual burning still happening.  Sadly, the only one that looks likely to survive for future generations is the Wishbone Tree. 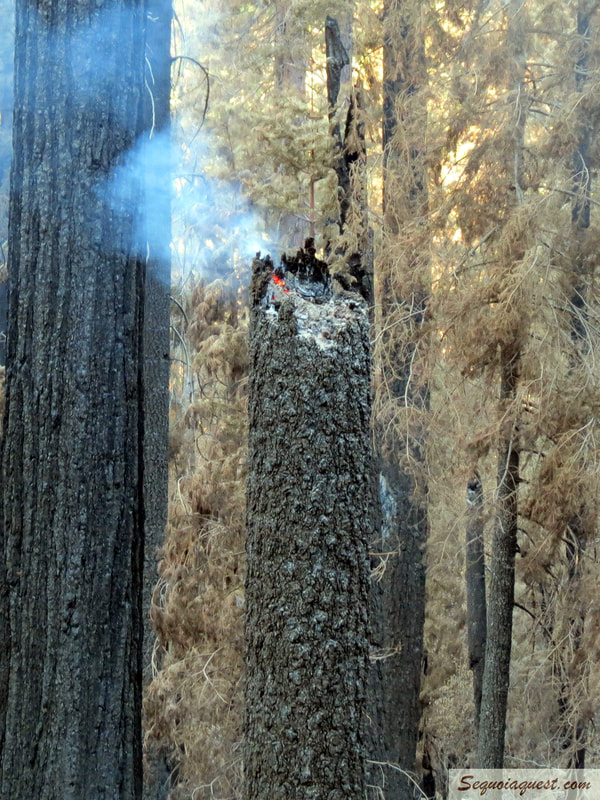 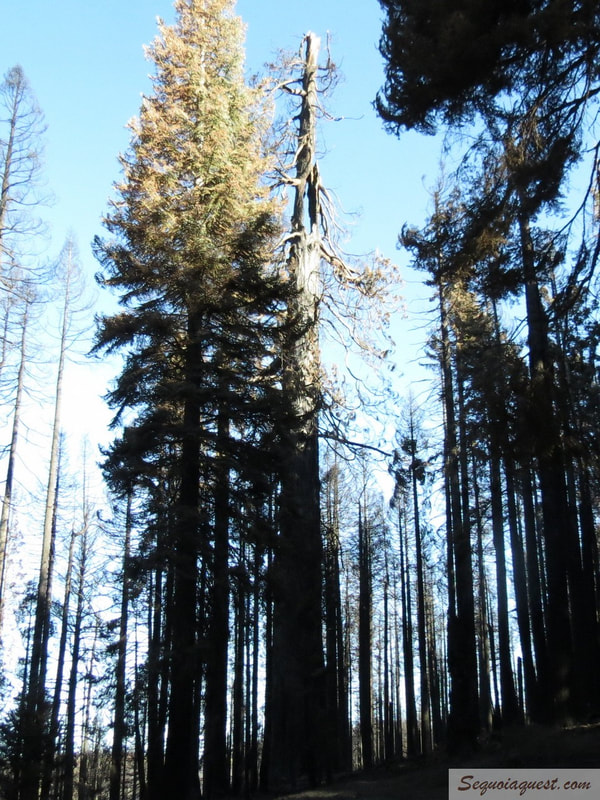 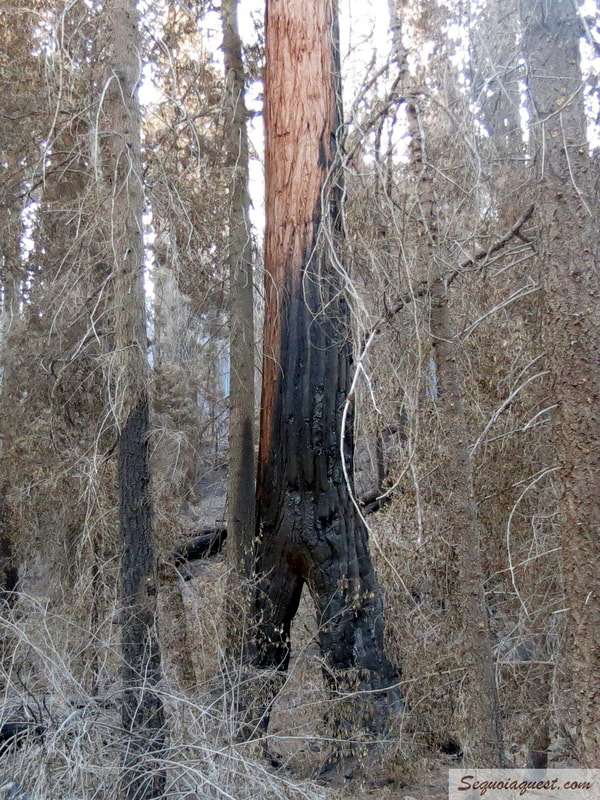 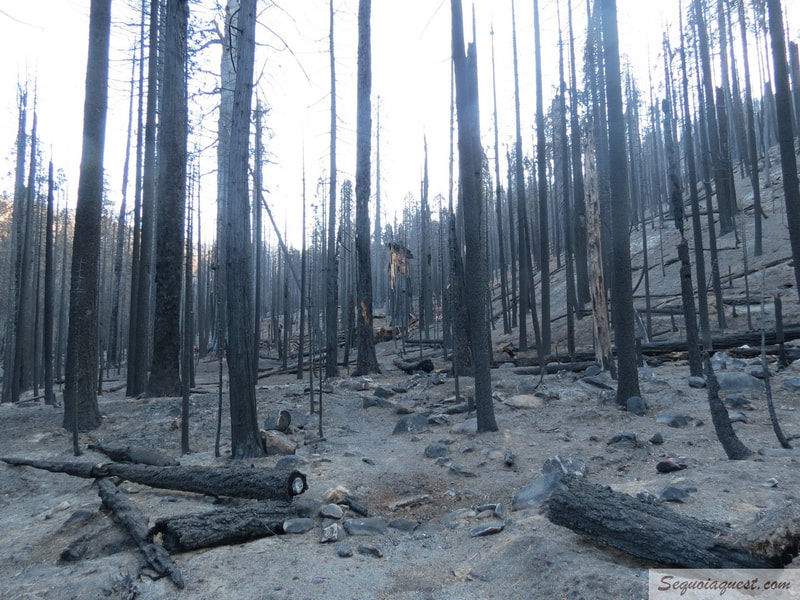 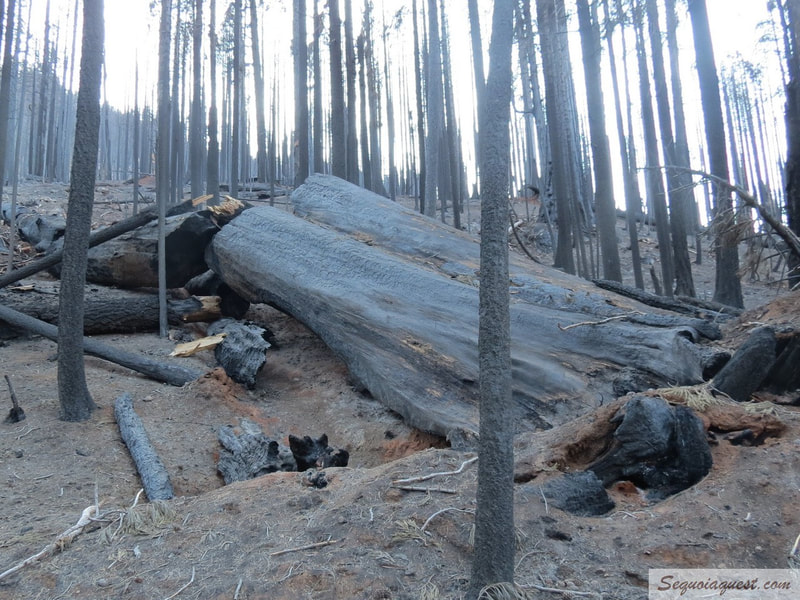 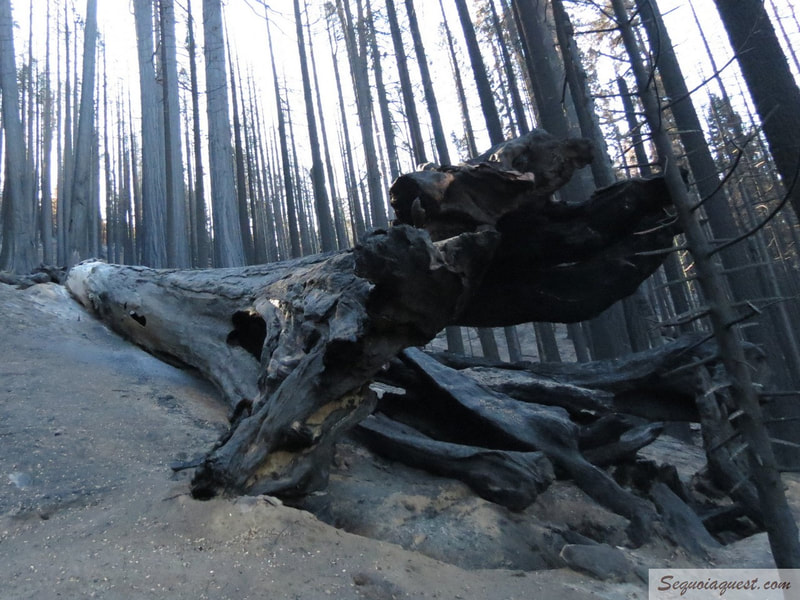 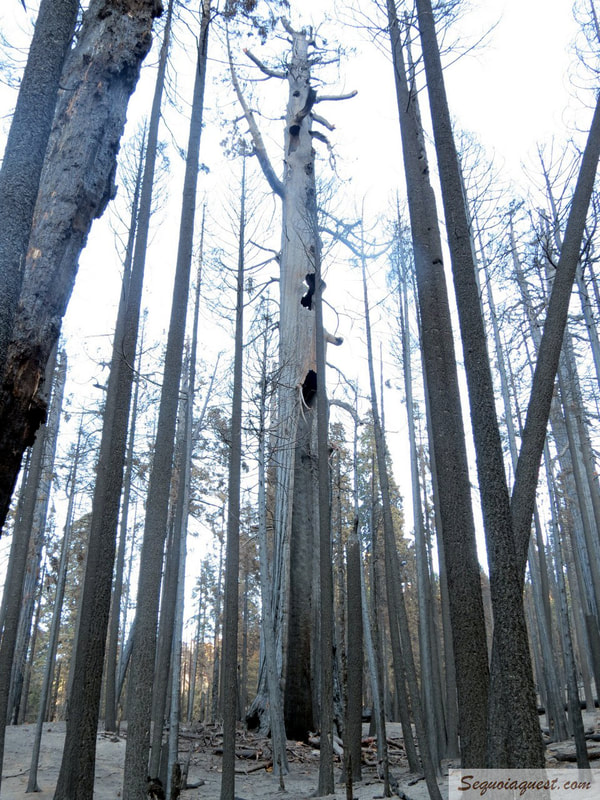 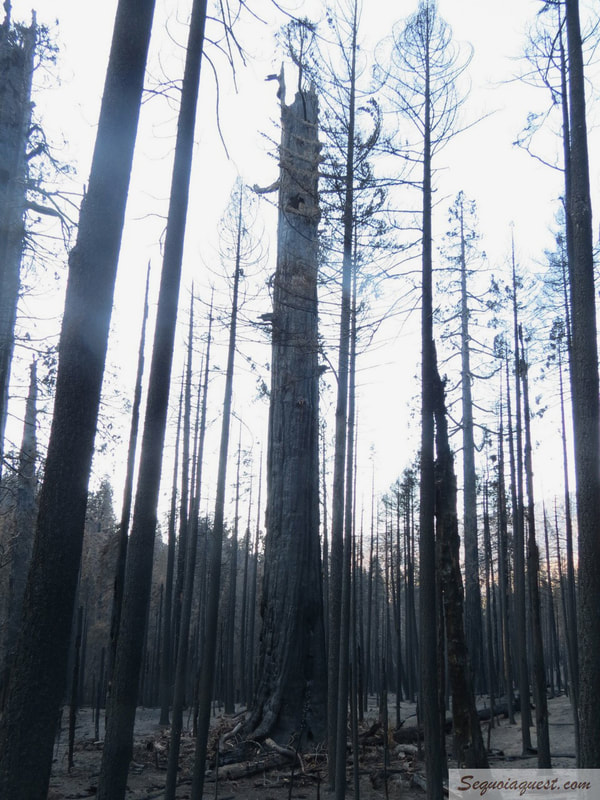 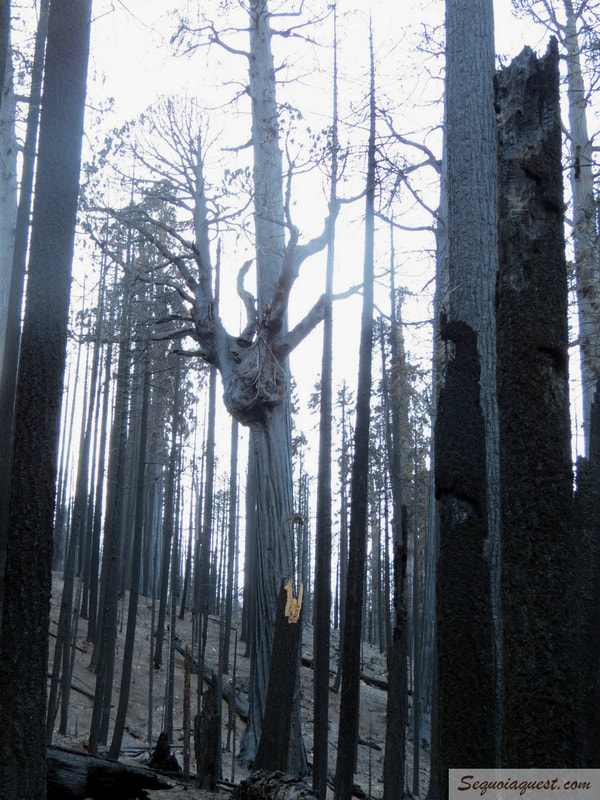 The western edge of the Freeman Creek Trail was damaged, but not as completely as the McIntyre Grove was. The Bannister Tree (top row) has lost height but still stands; however, the Telescope Tree (lower row) is charred to nearly nothing. 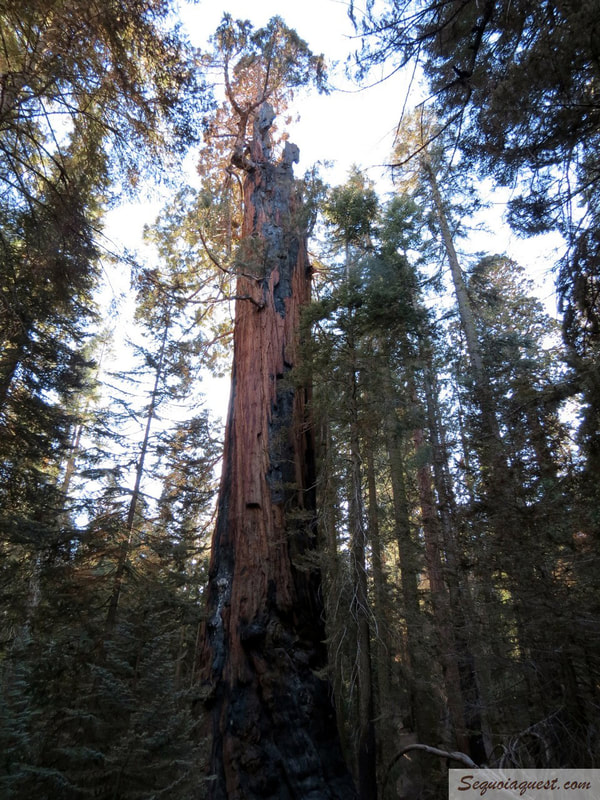 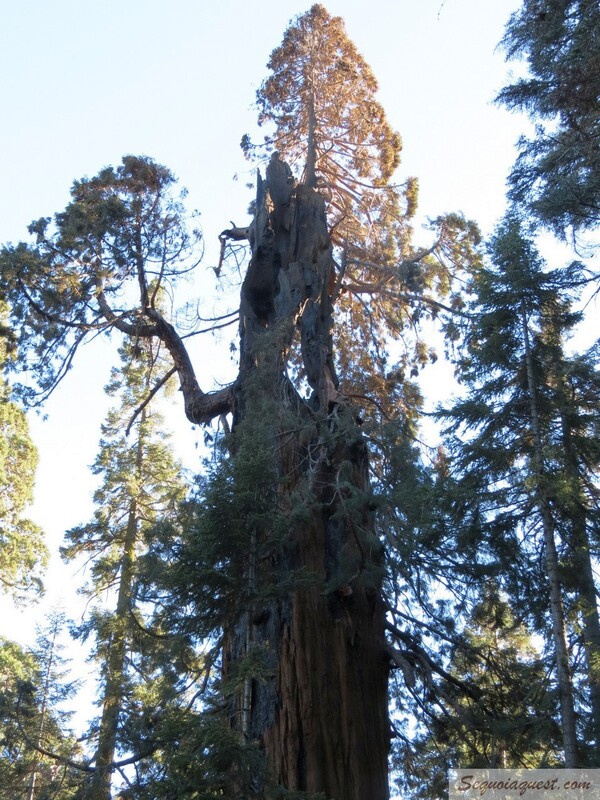 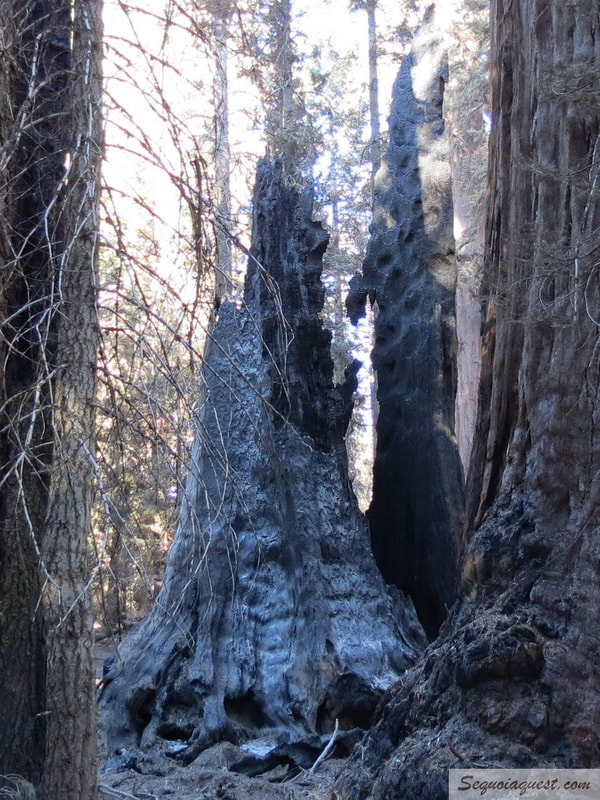 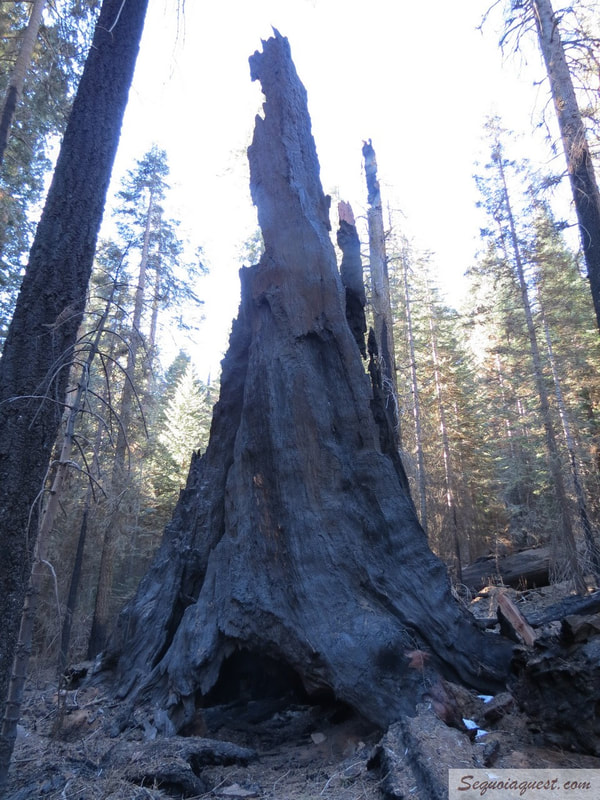 Below from left: one of the large backyard trees in Alder Creek, the Waterfall Tree, and the former Window Tree 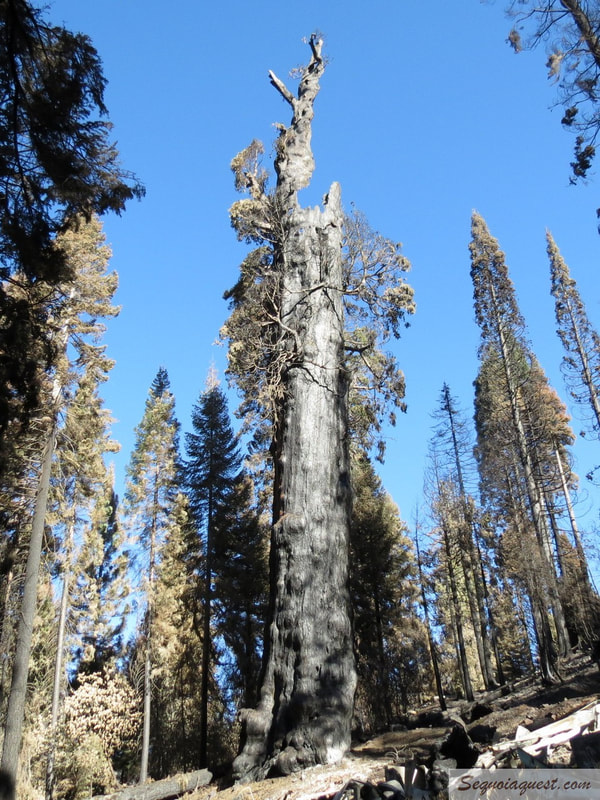 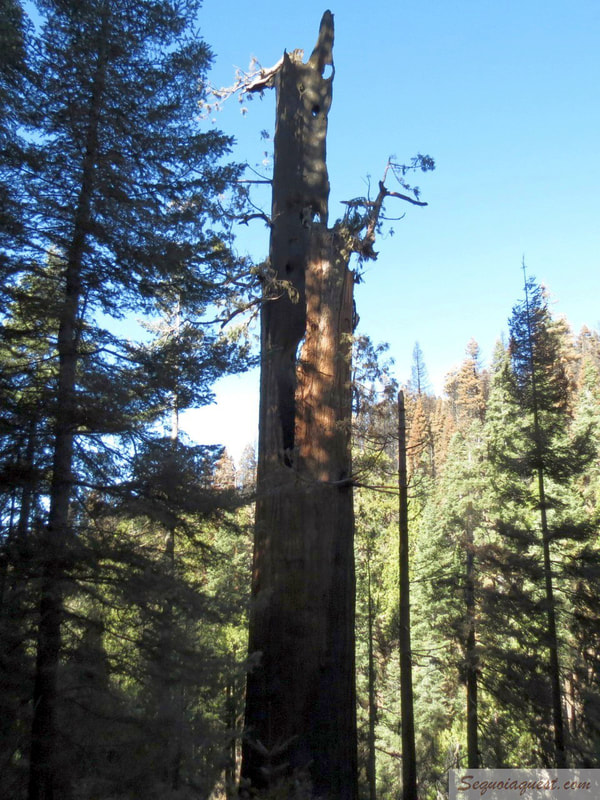 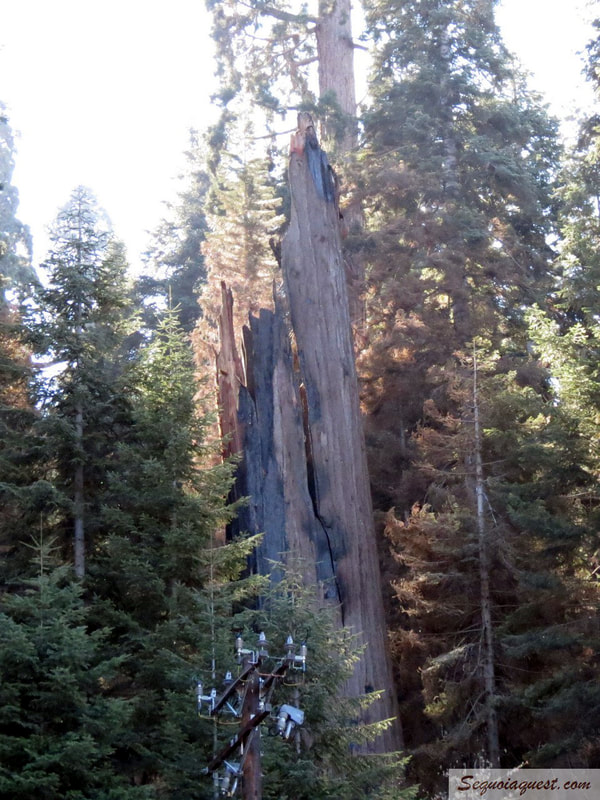