My Garfield Grove backpacking trip went very well. I had just enough time up there to be able to find all that I was hoping to see. I hiked with a small group of friends from Mineral King to Three Rivers, and our trek passed right through the Garfield Grove, which I have been wanting to explore for quite some time.

I knew of five big trees up there that I specifically wanted to see if I could, and I had a large ~20-foot snag I wanted to check out. I had general GPS locations for all of them. On some I had the trees' reported GPS coordinates; in other cases, I just had a good idea of where they were located. For those, before I left, I found the trees on a map and took the GPS points from there. So I had a pretty decent roadmap on what areas I wanted to explore, if not an exact location on all of my objectives.

My fellow sequoia hunters and I started in Mineral King Valley at the trailhead in Cold Springs campground. The first day we walked eleven miles with about 1,000-foot altitude gain to get to Hockett Meadow. Being late in the year, it was pretty nippy out. I was sleeping in a tent hammock, and the water bottle on the ground next to me froze overnight. But the company was good and it was fun to be out camping again.

The next day we walked about six miles, slightly downhill this time, losing about a thousand feet of elevation to arrive at the upper part of Garfield Grove. The next couple of nights we camped at a site named Stonehenge, which thankfully was warmer because of the lower altitude. Stonehenge is one of those rare flat spots in a grove that is just as steep as Atwell and Packsaddle. There are a bunch of furniture-sized rocks, generally arranged in a circle, with three sequoias about a dozen feet in diameter encircling them. With rocks for tables and chairs, the sequoia foliage for a roof and one of their lowest limbs for a pantry, and a nice little fireplace, it's a nearly perfect camping spot, the only detractor being the fact that the closest water is a quarter mile away.

The third day was our primary grove exploration day. I took a party of four out in the morning and found the twenty-foot snag to be one of the most complete, dead, really large sequoias I have ever seen. I wonder ... what killed it? Then we wandered through the Incredibole area, missing the actual target tree ... but when I looked at the pictures later, I realized we'd walked past it only about a hundred feet away. At least I got a couple pictures of it. We hit the campsite for lunch, then went off on a second hike looking for the biggest trees: King Arthur and Floyd Otter. A couple hours later, about mid-afternoon, two of my compatriots looked at the slope ahead and called it a day, but John and I continued on and finally got to the two champion trees in the grove. I didn't need to measure them, as they had already been checked out fully before we came through.

One big sequoia near these two that I did want to measure was the Eric de Groot Tree, which looks to be just over 30k cubic feet. That should place it in the mid-thirties on the largest list. I knew it was right next to King Arthur and Floyd Otter, so it was easy to find. After taking the time to collect its dimensions, it was getting near sunset, so John urged that we head back to the camp before dark. I reluctantly acquiesced.

At this point the only really big tree in the area I knew of that I hadn't found yet was Sawtooth. Since we were planning to break camp and walk out of the grove the following day, I concocted a plan to get up early the next morning and do one more exploratory march to see if I could find Sawtooth while the rest of the group was still sawing lumber in their beds.

I got out of the camp about three hours before the rest of them, figuring  that was about how long I needed to find the tree, take some measurements, get back to the trail, and join the group on our exodus from the grove. The way it worked out, that was just about right. I got to Sawtooth, took some pictures and dimensions, and got back to the trail out just as some of my party were passing by. Sawtooth is a very impressive tree, with a massive bole and huge limbs--well worth the early day.

On the walk out, we went right by the Bigfoot Tree, another well-known sequoia in this grove. It's not a huge one in overall volume, but it grows right out of the trail edge on a very steep section, so its unusually exposed roots and large basal bulge look impressive.

Only one of the above trees was on Flint's Top 40 list, but all five will be on my largest list, being among the top 60, so a really good score this trip. Got to see five trees in my top list on this walk.

As late in the season as it was, we did not see another person the whole trip except for the back-country ranger at Hockett (who was actually packing up to leave the grove for the winter as well). And this time of year the mosquitoes are gone too. That made the visit to the grove much better. All in all, a very successful big trees hike, though I would not mind going again to explore more and get additional pictures of this extensive grove. I would definitely want to stay again in that great Stonehenge campsite in the center of the grove. Though I have seen all of the big trees I've heard about up there, I haven't covered its whole area. I'm sure there's more to explore there! 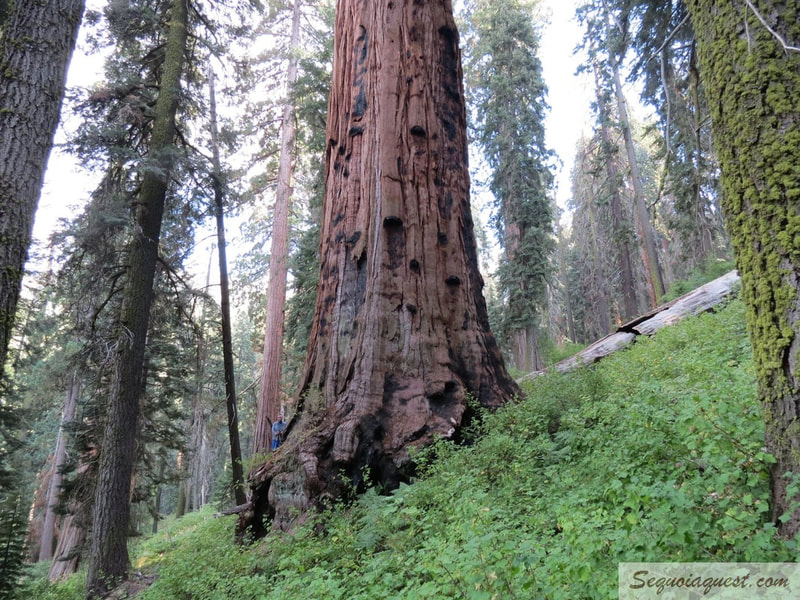 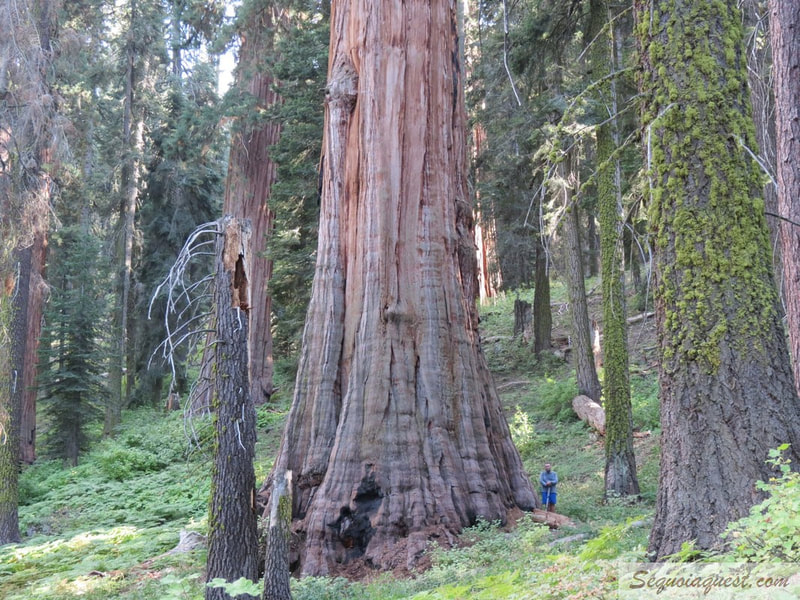 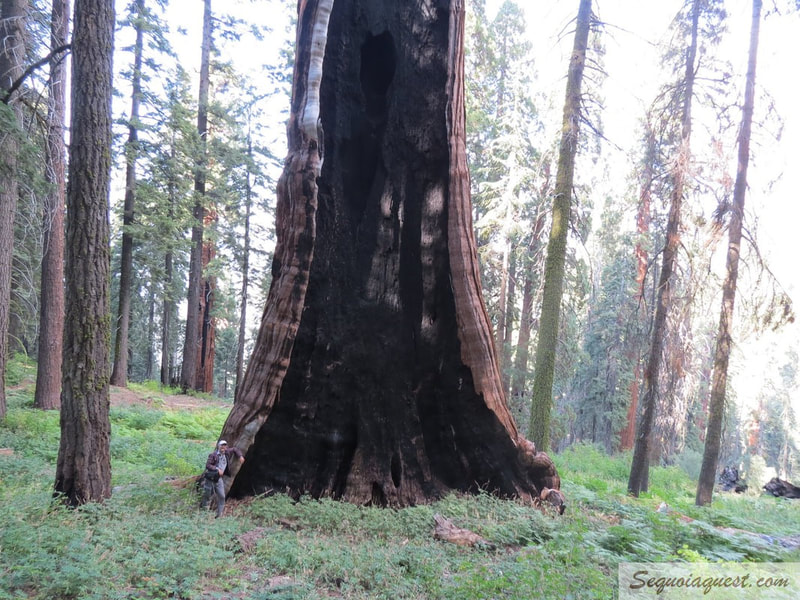 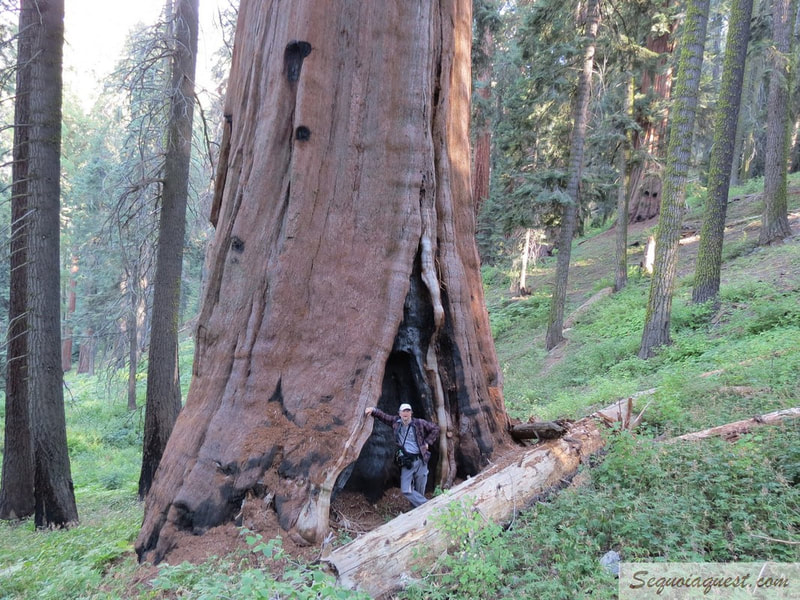 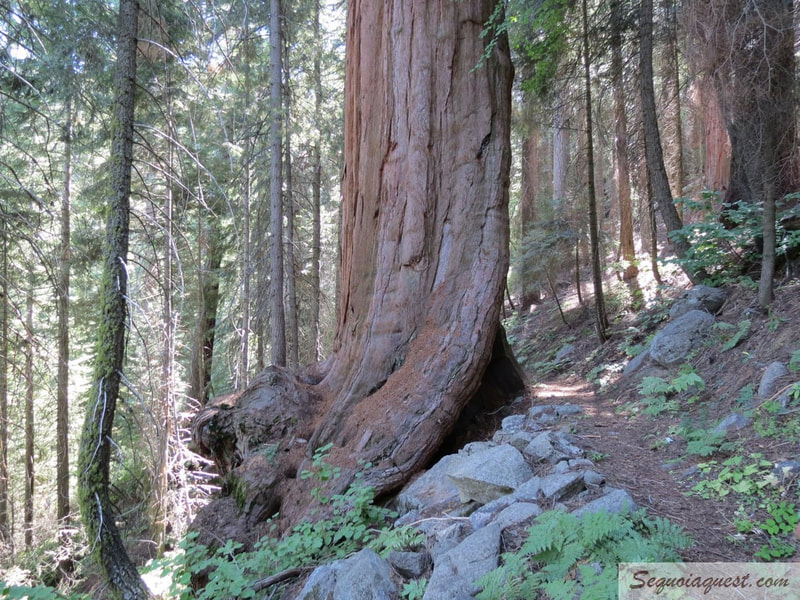 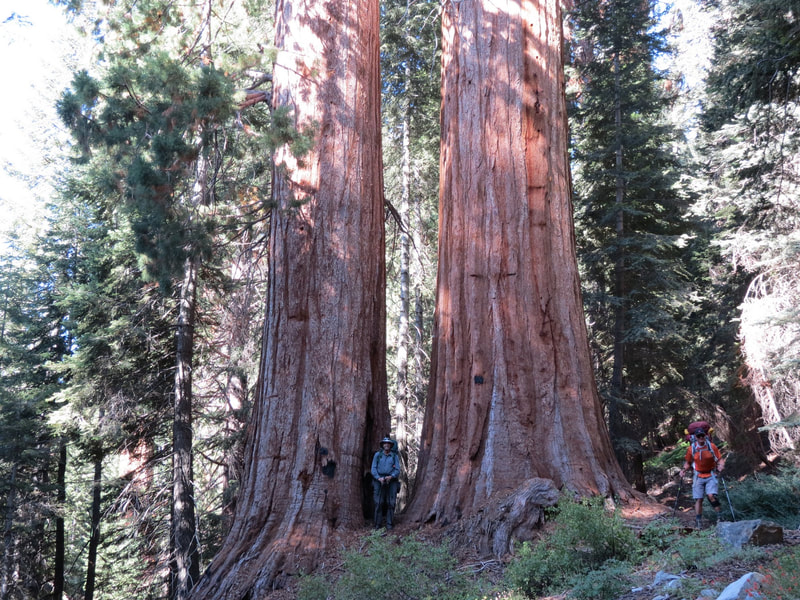 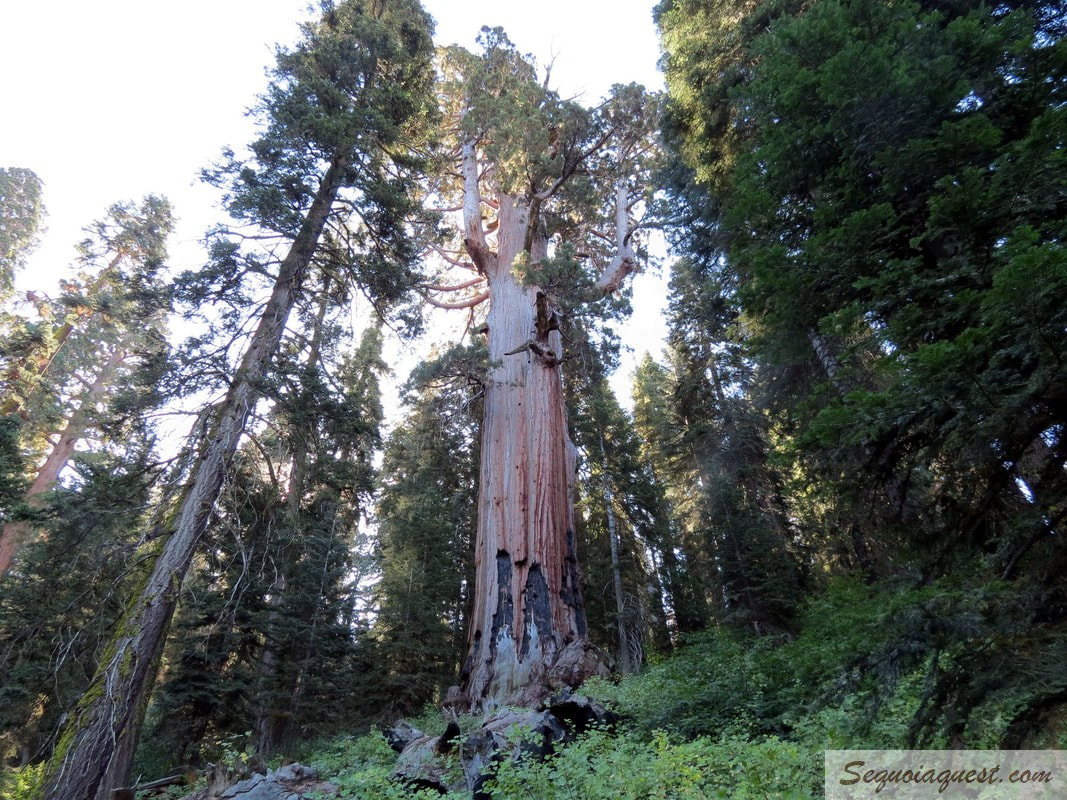