I have heard that the southern section of the Freeman Creek Grove was nearly 100% burned in the Castle Fire, and that is true. Crossing the higher southern sections of the grove you see nothing but a forest of burned, blackened tree boles missing only the cross pieces to make it a graveyard. There are a few trees in the area of the Loren's Tree that still show a hint of green on them; however, almost all of the trees on the surrounding ridges above, below, and around the Loren's area perished.

The area along Freeman Creek was burned but not as heavily, only moderately so. Some of the tributary creeks flowing into Freeman were also less than 100% burned. This is fortunate since one of them is the area where the Goshawk grows, and another is where the Sierra Ghost is.

The flat area to the south of Freeman Creek, where the Ride-Through Tree and Rattler lived, is also nearly 100% burned. It is now a moonscape, where it is difficult to even tell where the old trail went. The sequoias marking the beginning of the trail and Sleepy Hollow are almost fully consumed, with nothing left but blackened sticks.

I am glad I got the opportunity to explore so much of Freeman Creek Grove before the fire, as very little is left of it outside of the actual Creekside Trail.  In addition, since it is post-fire, those of us who like to take note of such things look for seedlings to see if the grove will grow new sequoias. The areas around Loren's Tree and Goshawk are both growing youthful sequoias. The other areas up high in the southern grove territory, however, do not show many seedlings at all.

One of the things that really saddens me about this grove's latest burn is the loss of so many historic markings on trees. I would never encourage name carving on trees; however, I admit I will miss the decades-old carvings in the more well known trees. At least five trees in the grove had initials carved in them from approx the 1930s. (Both Telescope Trees, the Ride-Through, the Tunnel Tree, and Sleepy Hollow all had initials carved on them from the early 1900s, all gone now.)

Unfortunately, much of the square footage of this grove has been decimated by the fire. I don't know if most of the heavily damaged sections in the south end of the grove will even re-grow new big trees. People have been exploring and enjoying this grove for many decades, and the devastation of so many trees and erosion of so much area of sequoia is a huge loss.

Well above the Freeman Creek, the trees suffer from a nearly 100% burn. Very few trees up in this area have any green left on them. 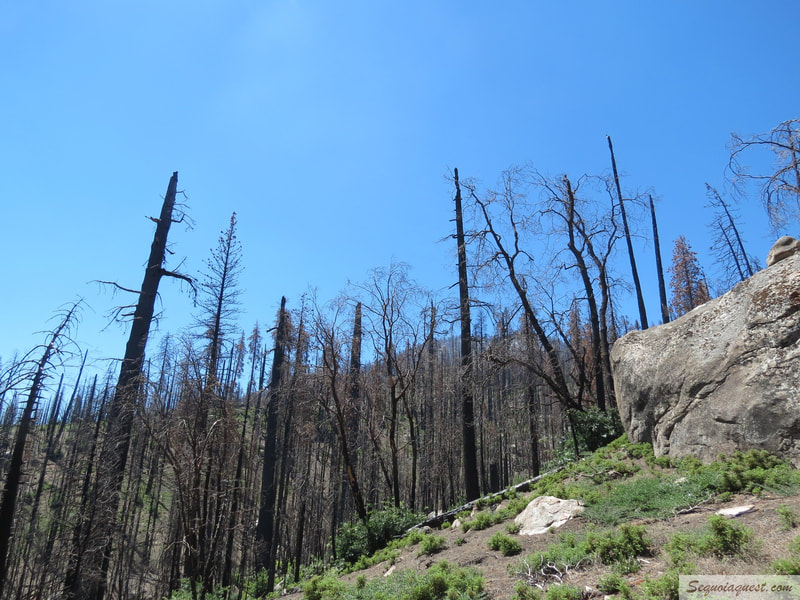 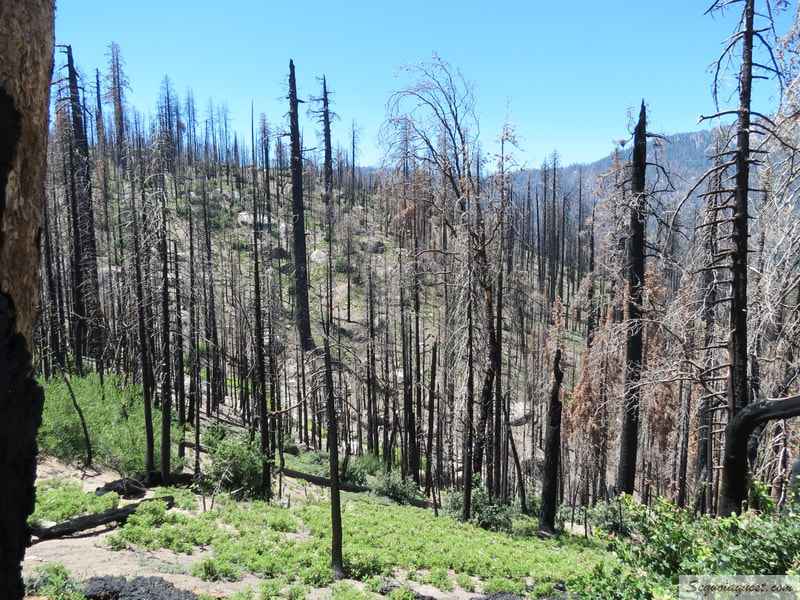 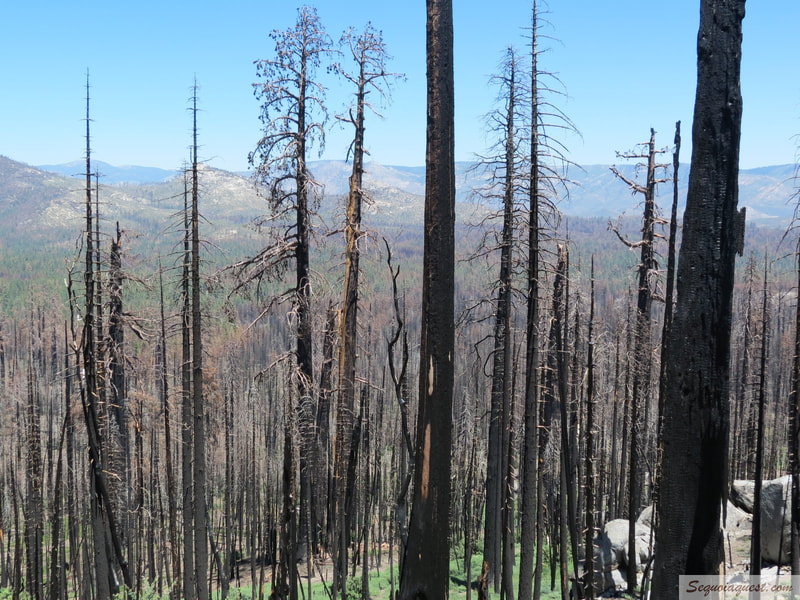 Trees below are ones that survived the fire, albeit with some damage: the Great Goshawk in all three pics of the first row; the Bannister, Sierra Ghost,  and the large tree at the midpoint of Freeman Creek shown in the second row. These were the lucky ones, although the Bannister is now foreshortened and the Sierra Ghost has a large arched opening all the way thru it instead of the former large front opening cavity with just a small slit in its back. 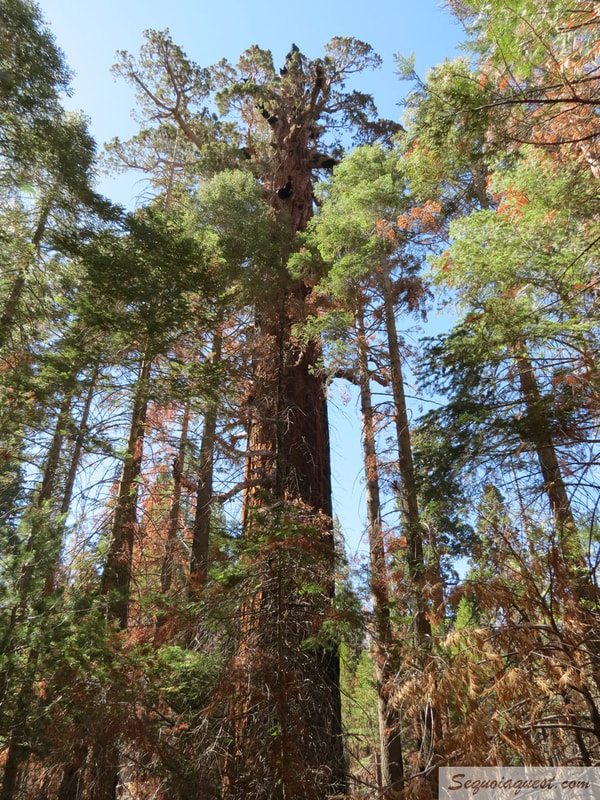 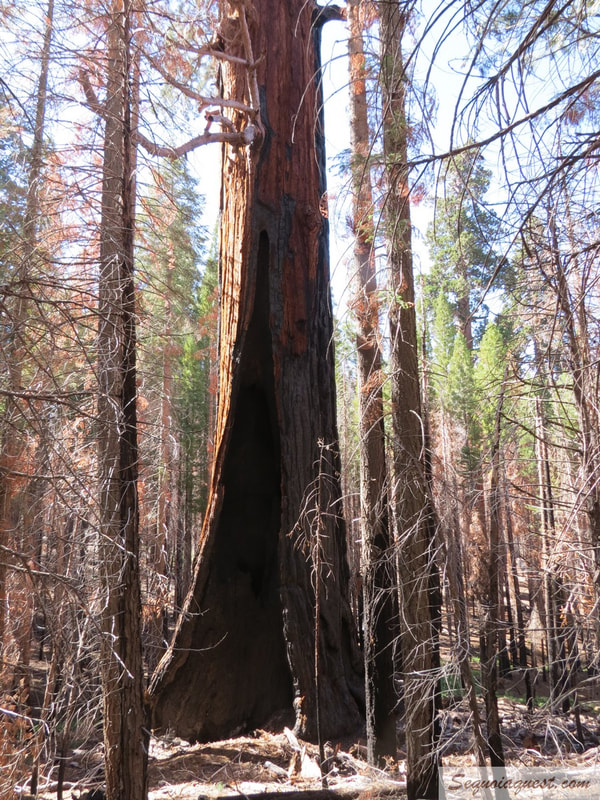 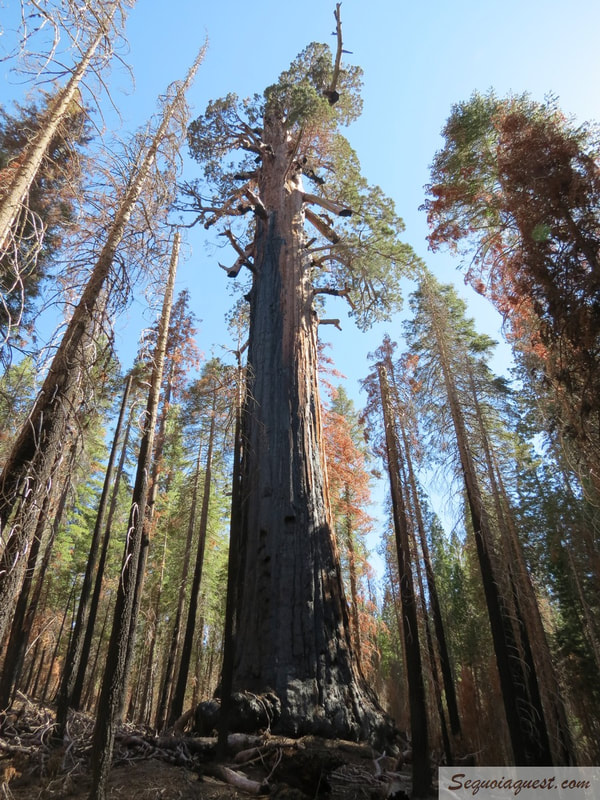 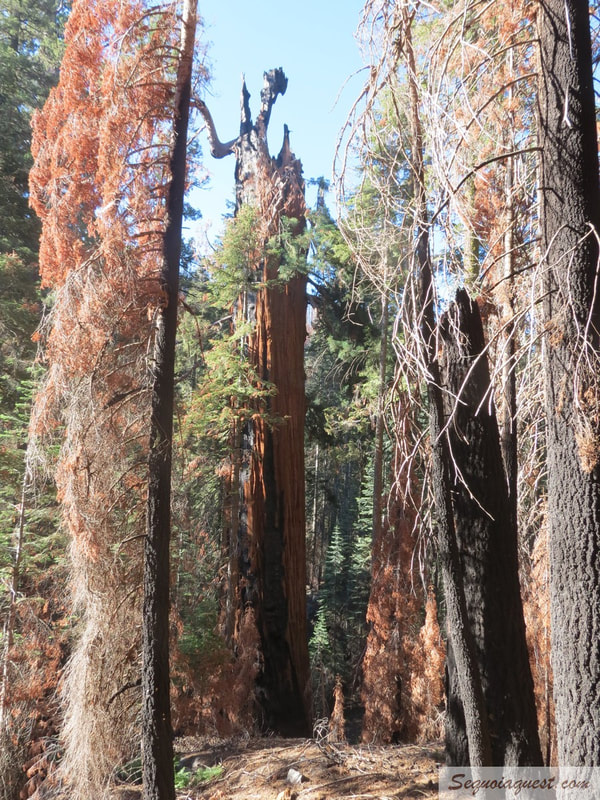 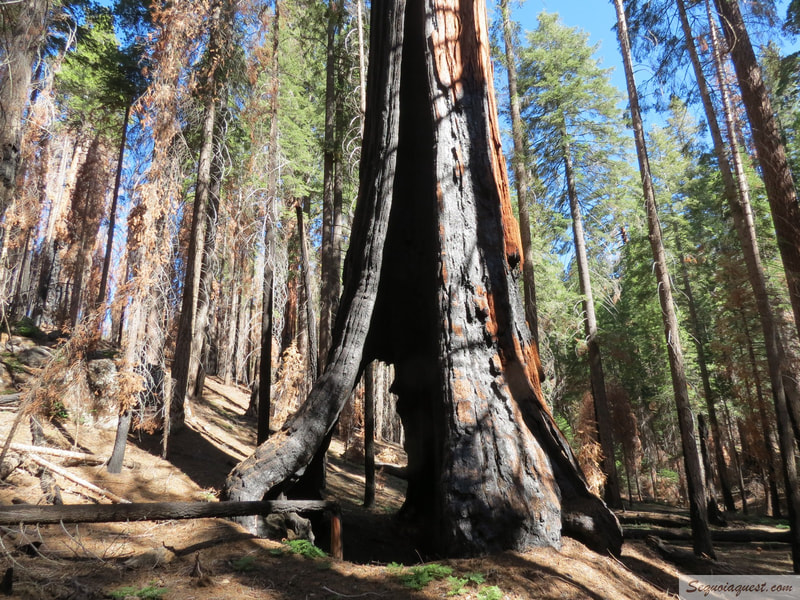 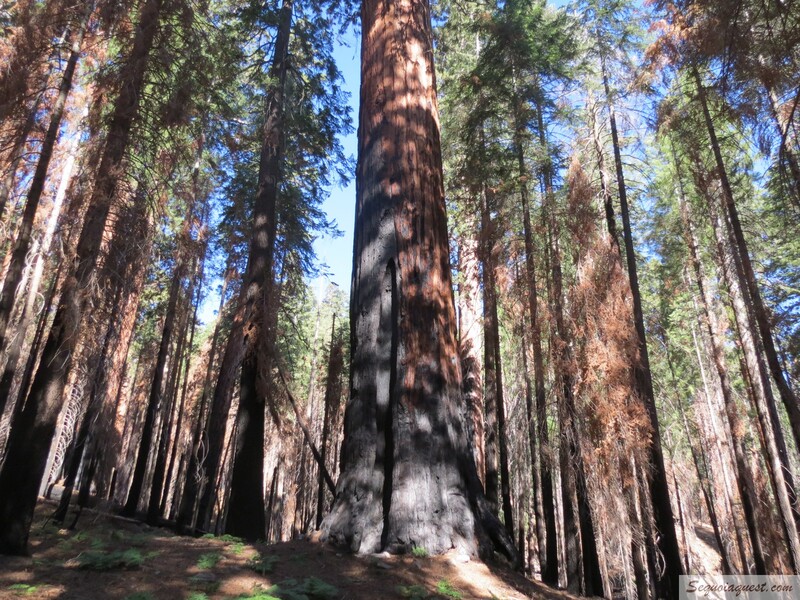 Trees that didn't make it below: Above Goshawk, Above Loren's, the large snag below Loren's, Loren's Tree, Rattler in two images, Ride-Through, and the Telescope near Goshawk in two images. The large Above Goshawk still has slight green on its top, however it is very torn up, likely not going to make it. The second pic of the Rattler is its former peculiar top's broken pieces scattered on the ground. 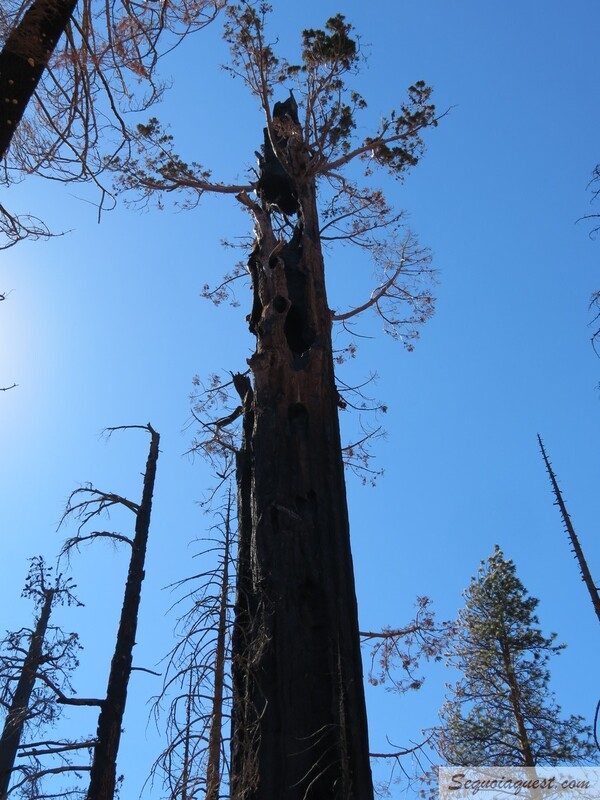 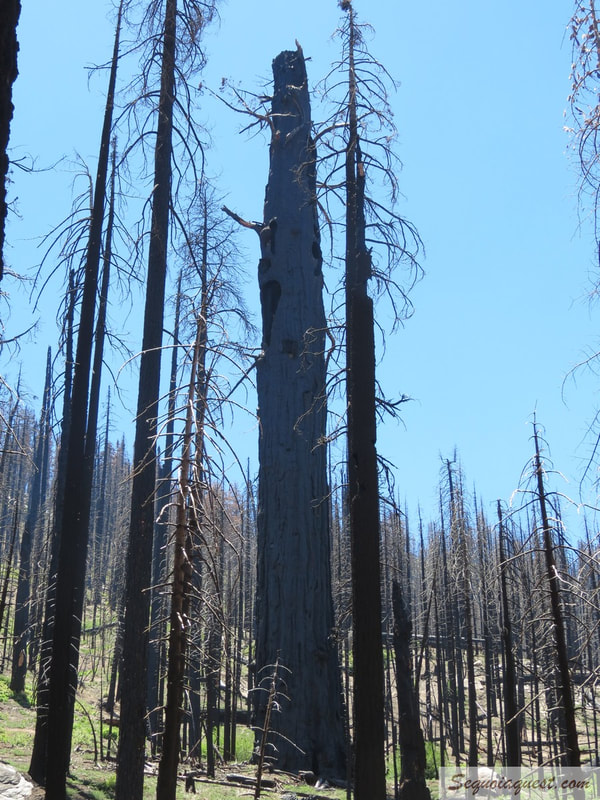 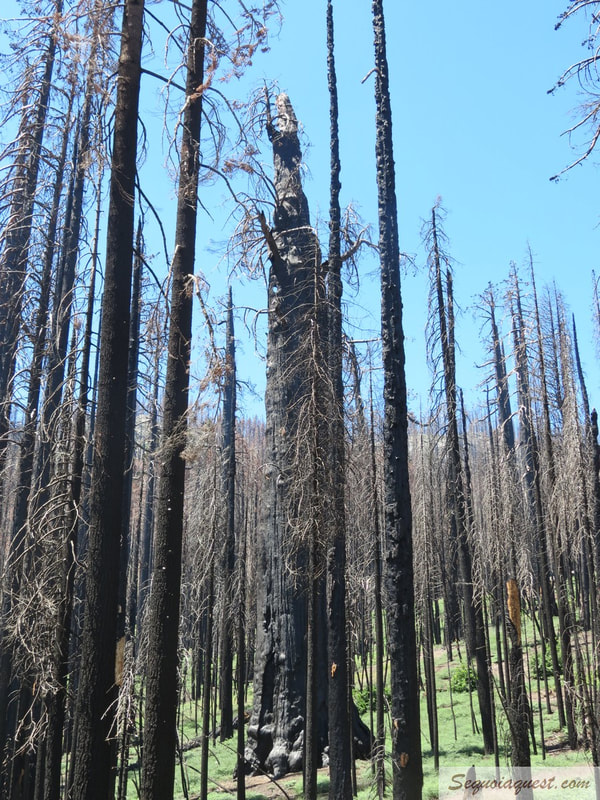 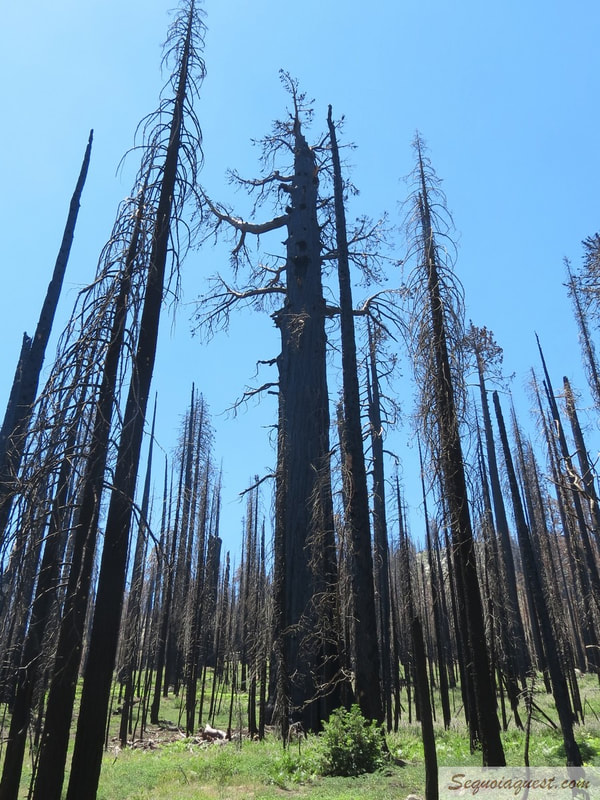 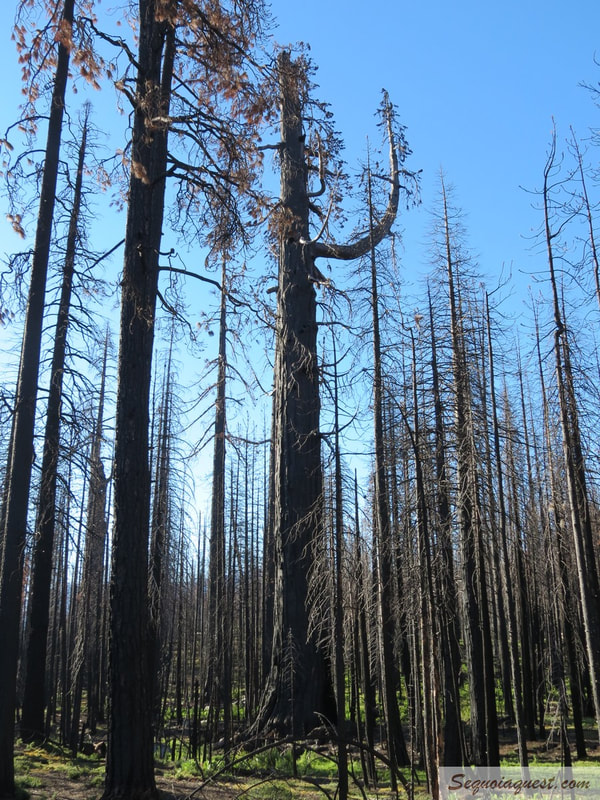 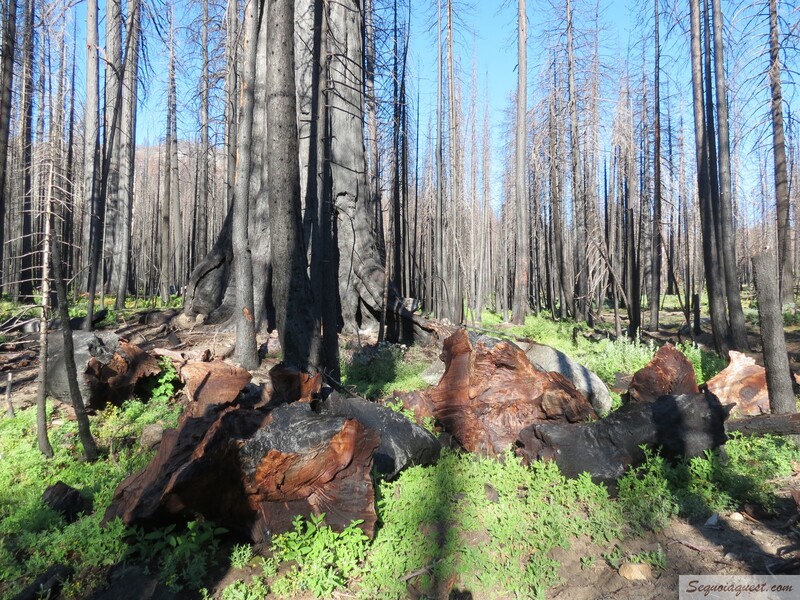 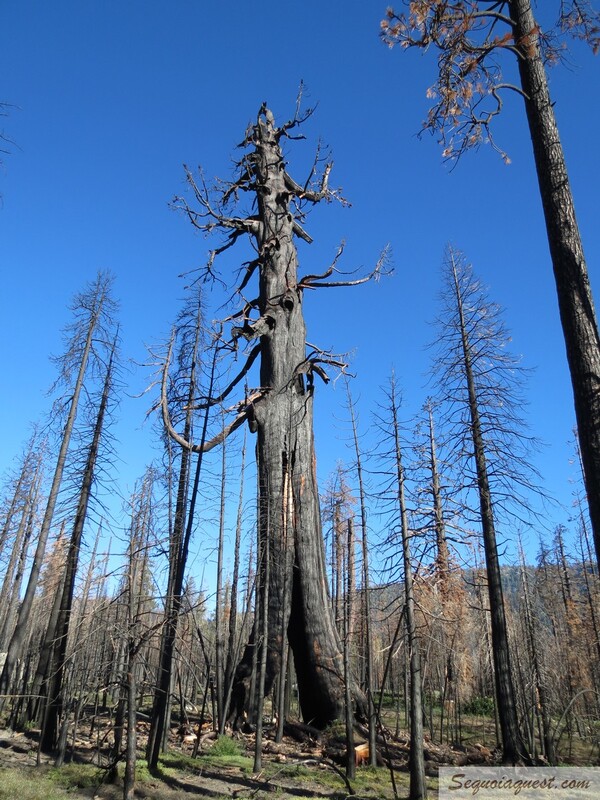 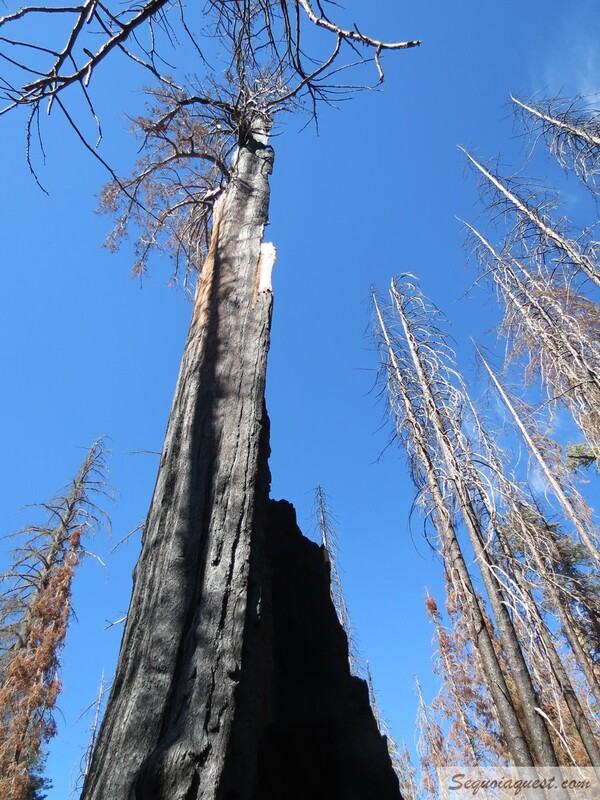 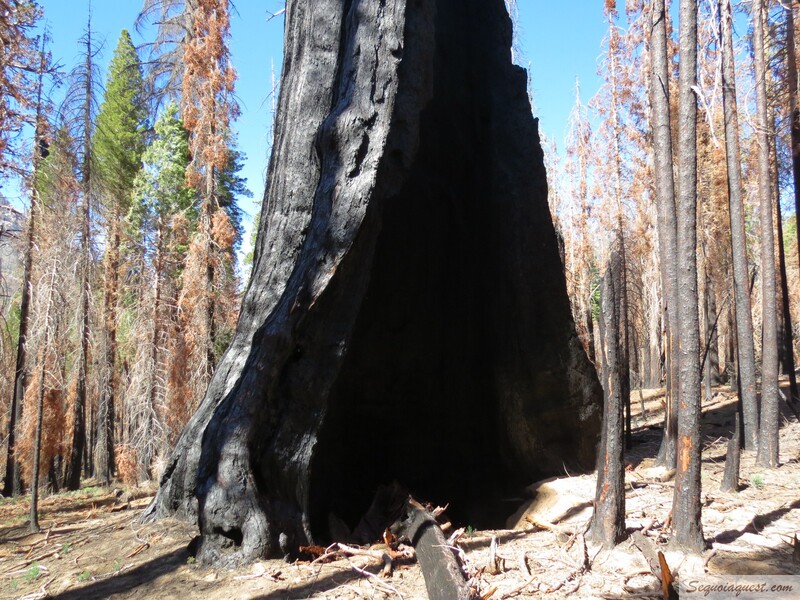 The two remaining toothpicks, the sequoia trunks at the beginning of the Goshawk Trail, and the Sleepy Hollow fallen log near that. 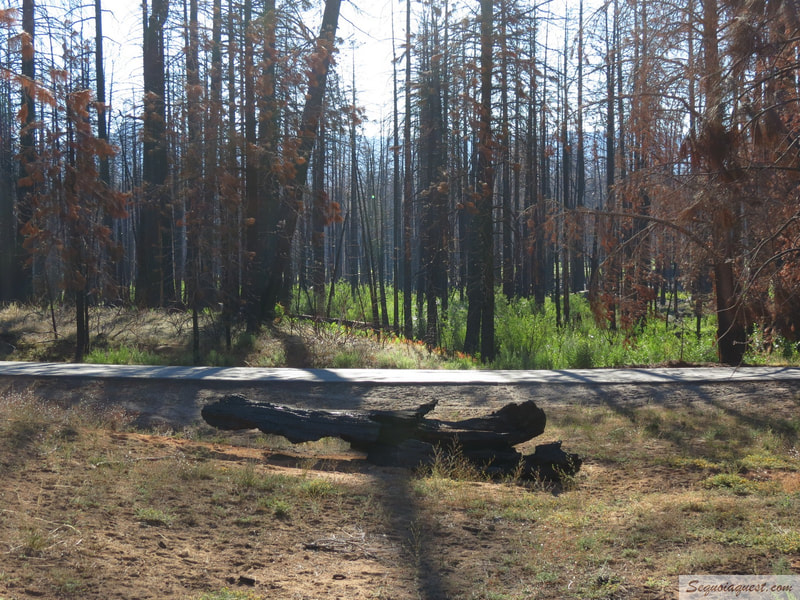 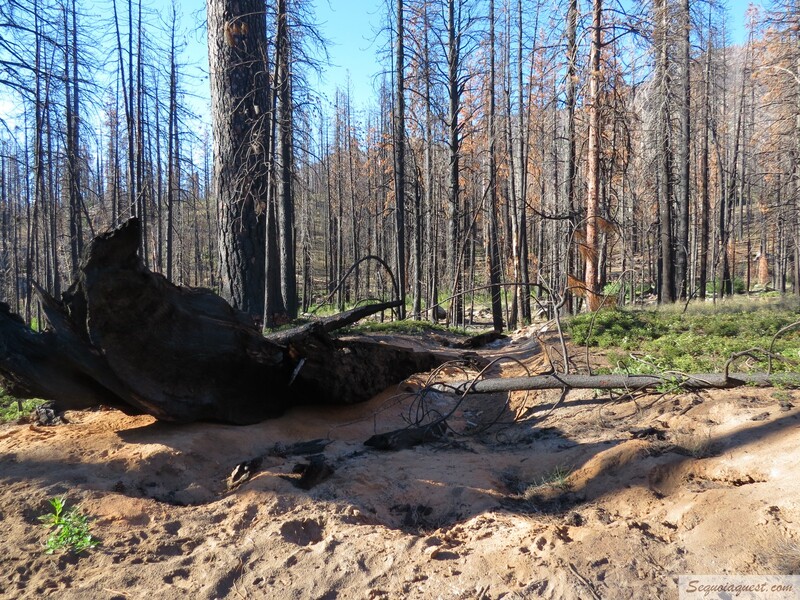 The below famliar triplet of trees near the old Goshawk Trail still shows just a little green in their tops in spite of the bark char going well up their boles. 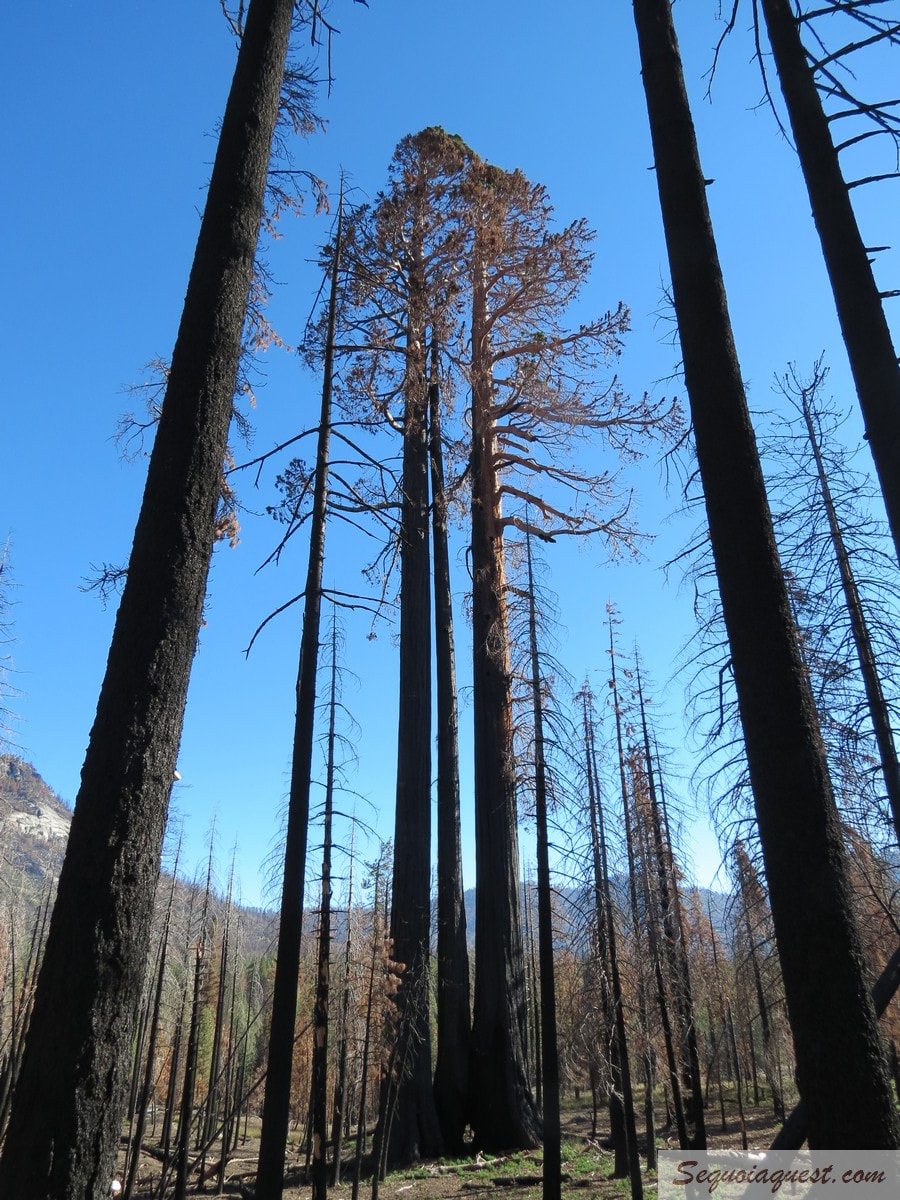