This holiday weekend was our third attempt to get to Black Mountain Grove. On our first try, the ground was too muddy for our car to get very far along the dirt road. The second time, a tree that was bigger around than my body had fallen across the road, preventing us from attaining our goal. This time we finally made it—about time!

The road was dirt but passable and made for a scenic drive through the periodic stands of sequoias. I hoped to find some notable trees, such as the inspiring and undaunted Perseverance Tree, the Harlequin Tree, the Upside-Down Wishbone trees, the Three Sisters formation, and the Four Horsemen grouping. We caught all of those on the drive and thoroughly enjoyed seeing them.

I planned an overnighter in the grove because I knew there was a lot of acreage in there for exploring and it appears that I could have stayed longer.  We went as far as we could on the roads, which just got narrower until they eventually stopped because of fallen trees. Then we did a bit more walking to get to the other highlights that we wanted to see in the grove. In the heart of the grove we found more exceptional trees: the Blasted Mammoth, Fallen Mammoth, a spyglass tree, a chimney cabin tree, and a pretty big sequoia near the eastern fork of the road below the Blasted Mammoth ridge that i felt the need to get dimensions from.

Up the ridge from the road is Blasted Mammoth, a large-diameter, hundred-foot-tall topped tree that Flint said would be the largest in the grove if it were still intact. The Fallen Mammoth is a similarly large carcass, which I would have liked to see when it was standing, but nonetheless quite enjoyed climbing upon as it was. The spyglass tree was off the side of the Blasted Mammoth’s ridge and you can see through it completely near the top where a branch has fallen off.

The Chimney Cabin Tree is an interesting big sequoia with a small opening at ground level that must have a story attached to it out there somewhere. Its entrance is not big enough to walk into at my full height, but inside it is a nice-sized room, with a telescope going all the way up to the sky. Someone managed to stuff a fifty-five-gallon drum into the opening, filling it almost completely. Caching their camping supplies in the drum there serves dual duty as it closes off the doorway to the cabin.

We also discovered a big sequoia below Blasted Mammoth’s ridge large enough for me to want to measure. It doesn’t reach to quite the size of Black Mountain Beauty, but it’s about twenty feet in diameter at breast height and retains its width pretty well going up its trunk. It’s maybe the third biggest sequoia I’ve seen in this grove.

I provided some entertainment for both of us by counting the perseverance-style trees we came across. (These are trees that have a sheered off top and  are persevering with a new leader limb spearheading skyward off to the side of the broken main bole.) I counted about six of them in pretty developed states before we ran out of daylight. There are a lot of top-damaged trees here, more than I’ve seen in other groves. I wonder if there’s more severe lightning or winter weather conditions here than in other parts of the Sierras.

The grove is both beautiful and large, with lots of big sequoias in it, and as a bonus we didn’t see any other people or vehicles there the whole weekend. That is saying something, especially since this was Memorial Day weekend. My kind of grove. We did see enough bear scat that Kathy decided we should use the tent for storage and sleep in the back of the truck. John Muir’s views on the gentleness of wild animals aside, I suppose that was the prudent course considering how lonely and isolated the area was.

Unfortunately, the weekend was not a clean sweep, as we did not find the Black Mountain Beauty—the one thing in the grove I can’t take a miss on, being the biggest tree there. Since it eluded me, we’ll just have to come back again and do some more hiking in search of it. What a shame. 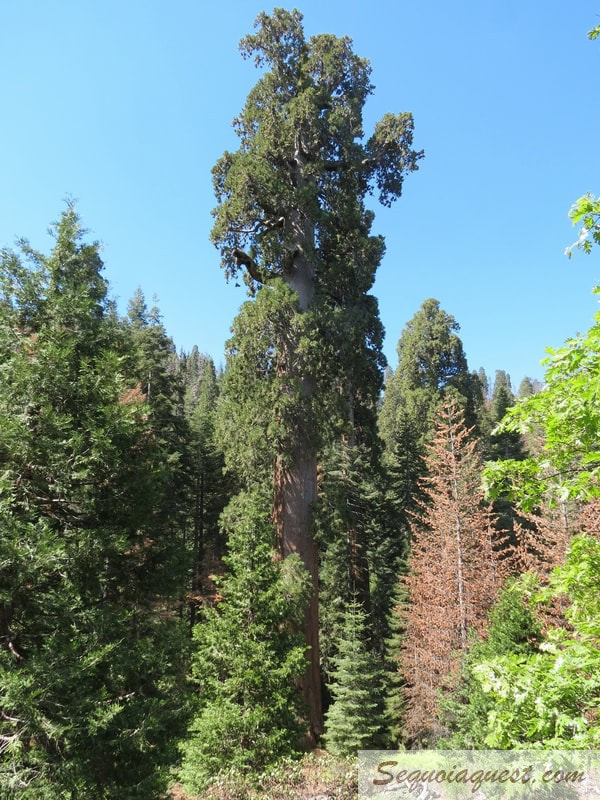 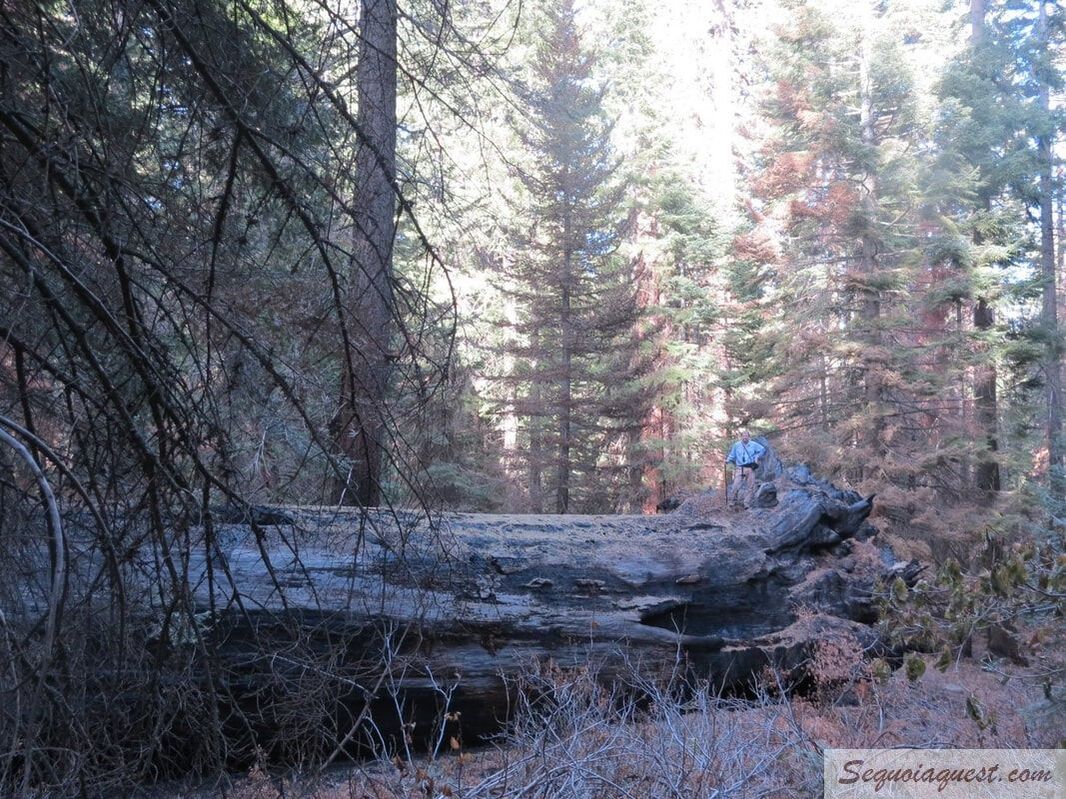 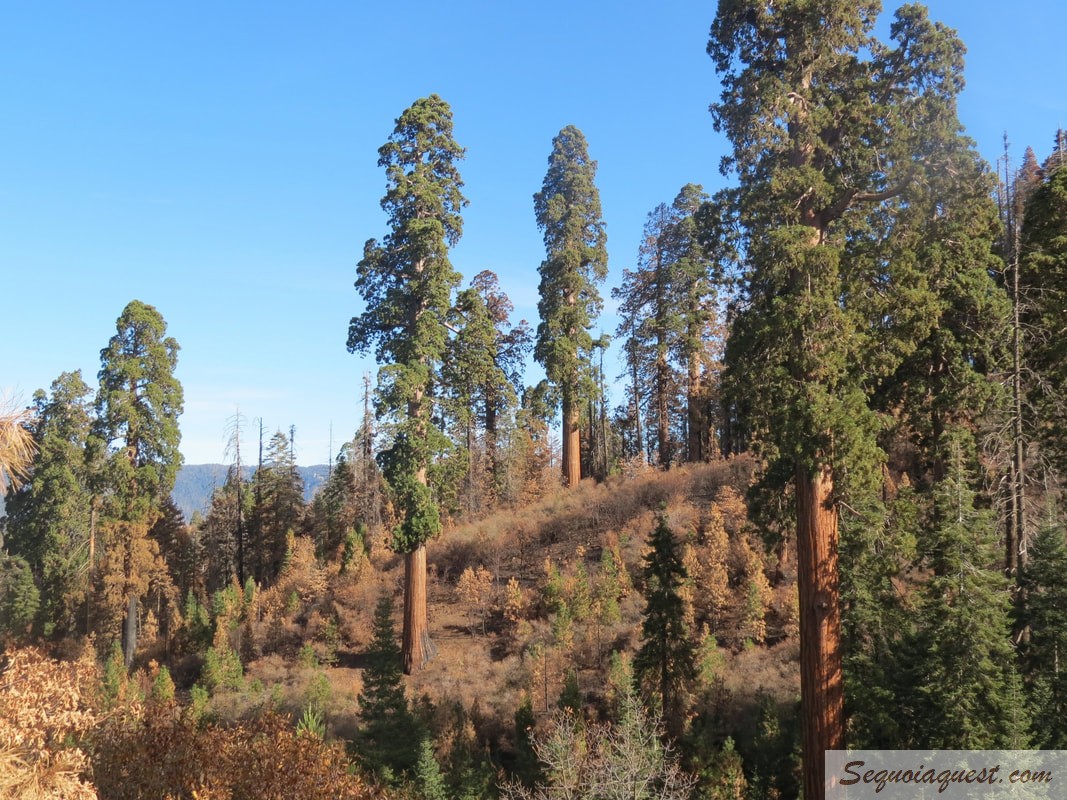